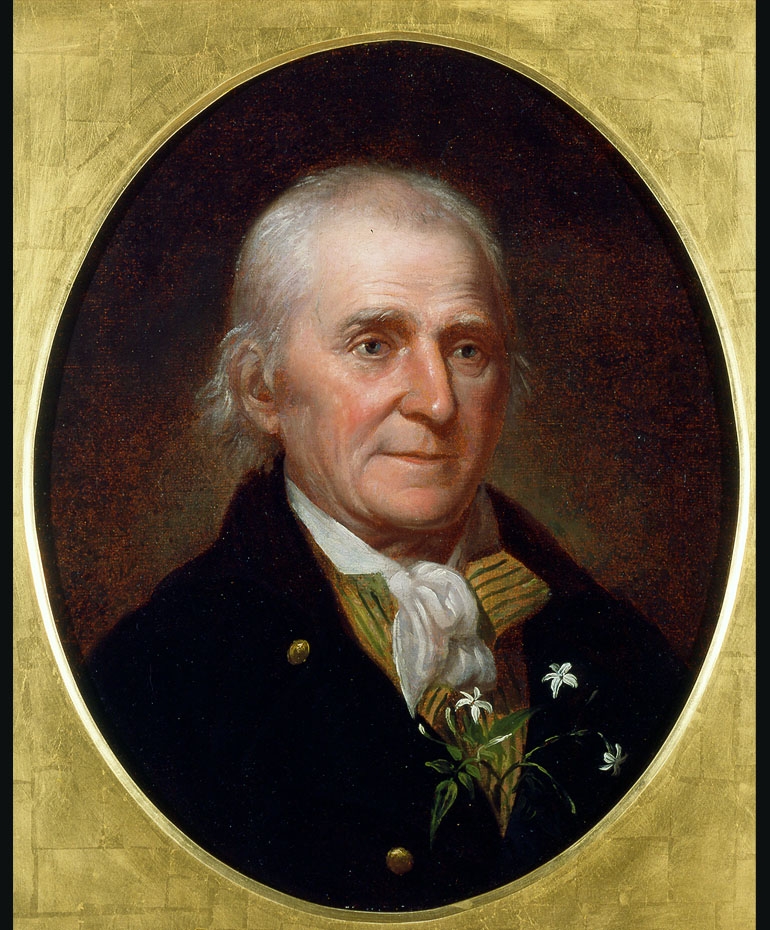 Son of John Bartram, America’s first professional botanist, William Bartram (1739-1823) was born on April 9, 1739, in Kingsessing near Philadelphia, Pennsylvania.  From a young age, William developed a keen interest in botany and drawing.  Though he tried on more than one occasion to enter the professional world in both business offices and printing shops, Bartram always longed for the outdoors.  It is no surprise, therefore, that we find a 26-year-old William accompanying his father on the elder Bartram’s great botanical expedition to the newly acquired Florida territory in 1765.  Commissioned “the King’s Botantist,” John Bartram was to explore the new southern territory acquired from Spain in 1763.

During the expedition, William Bartram fell in love with Florida, even attempting a short-lived venture into indigo farming along the St. John’s River.  Though this experiment ultimately failed, he remained in Florida for a time, taking a position as a draftsman on an expedition to map the coastline.  Eventually he was forced to return to his father’s home in Pennsylvania, but his love for the South did not dissipate with time and distance.

In 1773 he was finally able to return to the area after securing funding from wealthy plant collector John Fothergill to conduct a botanical exploration of Florida.  While visiting the Georgia coast in March of that year, Bartram learned of an important meeting between representatives of the Creek and Cherokee Nations that was to take place in two months’ time in Augusta.  He decided to stay in the area long enough to attend the meeting and record the proceedings.  In the meantime, however, he explored the Georgia coast, including visits to Savannah, Midway and Sunbury.

Since the official minutes of the May 1773 meeting of Native Americans in Augusta have been lost, Bartram’s description is the most valuable record available.  The meeting dealt with the cession of lands by both the Creeks and Cherokees.  Following the meeting, Bartram joined the surveying expedition sent to mark the new boundaries.  However, an outbreak in hostilities forced Bartram to abandon his journey soon after it began.  He then returned to the coast before continuing on to Florida.

In October 1774, Georgia Governor James Wright signed a treaty with Creek leaders, and Bartram decided to resume his tour of Indian Territory.  He described the mountainous Cherokee territory along the Little Tennessee River, and then headed south toward Mobile, Alabama.  He then traveled to Pensacola, and on to the Mississippi River.  Bartram’s writings give an invaluable look into Native American culture, particularly that of the Creeks, at the time of the American Revolution.

He returned to Philadelphia and spent eight months with his father before John Bartram’s death in September 1777.  William spent the next several years preparing the account of his travels for publication.  Travels through North and South Carolina, Georgia, East and West Florida, the Cherokee Country, the Extensive Territories of the Muscogulges or Creek Confederacy, and the Country of the Choctaws, was published in 1791.  William Bartram spent the last years of life quietly, in Philadelphia.  He died at the age of 84 on July 22, 1823.