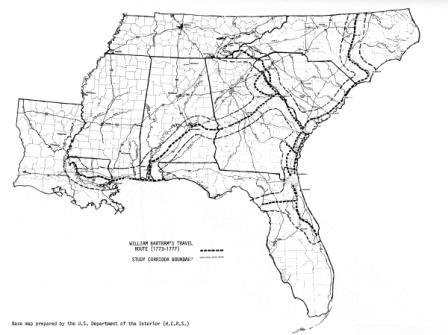 How would you like to walk in the footsteps of William Bartram and see some of the places that he visited on his travels? Thanks to the hard work and dedication of many people, you can. In 1976 a group of historians and preservationists gathered together and established the Bartram Trail Conference. The goal of this group was to locate and mark the route of William Bartram’s travels through eight southern states: North Carolina, South Carolina, Georgia, Florida, Tennessee, Alabama, Mississippi, and Louisiana.The Conference did not want to create a connected, continuous trail such as the Appalachian Trail, which follows the Appalachian Mountains from Maine to north Georgia. Such a trail would not be practical because although Bartram’s route wanders through some mountain wilderness, it also passes through some very large and developed cities such as Myrtle Beach, Charleston, and Savannah. What the conference decided to do was to interpret the trail broadly. Rather than sticking to Bartram’s specific path, the Conference thought it would be more meaningful if a user of the trail could have, “’Bartram like’ experiences seeing the southeastern landscape in its eighteenth century context” (Spornick, pg. xiii).

The Bartram Trail is actually a series of Bartram memorials including trails, Bartram heritage sites, gardens, heritage centers, and heritage cities. The Bartram Conference organization has worked with trail societies and garden clubs who have built and marked hundreds of miles of trails for hiking and canoeing. The conference has also identified more than fifty Bartram heritage sites in seven states. Many of these sites are marked with a Bartram Trail historical marker. Bartram gardens and memorial parks have also been established in Florida, Alabama, and Mississippi. The Bartram Trail Conference works to highlight natural areas and culturally significant locations along Bartram’s route.

The Bartram Trail Conference encourages the study, preservation, and interpretation of William Bartram’s life and contributions. The Conference hosts a biennial meeting of members at locations along the Bartram trail corridor. 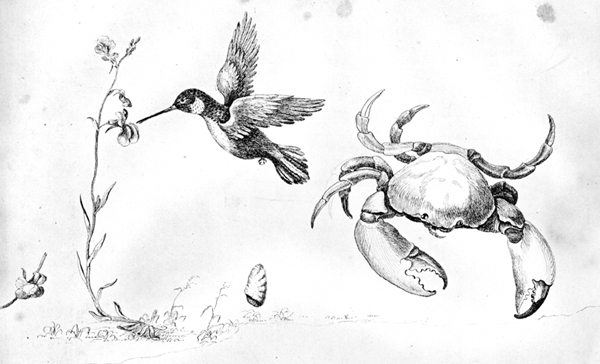 The Bartram Trail Conference has marked several sites and trails in Georgia that follow Bartram’s path. There is a marker on Savannah’s River Street at River Front Plaza to commemorate William Bartram’s arrival in Savannah in 1773. Augusta’s Canal Trail and Riverwalk wander eight miles through what is now downtown Augusta. The trail closely follows what is thought to be Bartram’s route through this area. In north Georgia, there are several miles of marked trail along the Chattooga River and trail segments near Pinnacle Knob and Courthouse Gap just outside of Clayton, and Rabun Bald and Estatoah Falls near Sky Valley.

The Bartram Trail Conference has also marked miles of trail in the North and South Carolina mountains and in other states in an effort to recreate and preserve as much of Bartram’s route as possible on land near the original path. Over 200 miles of marked trails offer the traveler an opportunity to see spectacular natural sites in much the same way that Bartram did. The trail is composed of hiking, canoeing, and horseback riding segments.

If you are interested in following the Bartram Trail, there are several wonderful guides and maps that you can use to assist you with your adventure. One of these guides is An Outdoor Guide to Bartram’s Travels. This book suggests trails, walking tours, and site visits in the places Bartram visited. It has maps, and very specific directions to Bartram trail locations. Another helpful resource is the Guide to William Bartram’s Travels: Following the Trail of America’s First Great Naturalist. This guide has a detailed chronology of Bartram’s journey, as well as biographical information about Bartram. The book also contains maps and suggestions for site visits along the route that he followed.