The Georgia Historical Society is pleased to present “Conquered Banners: Georgia’s Civil War Flags.” This 12-month exhibit of rare flags made and carried during the first year of the Civil War will be on display in the reading room of GHS’s Hodgson Hall. The six beautifully-conserved flags, on loan from the National Park Service, Fort Pulaski National Monument, will rotate for display every three months throughout 2011 – the first year of the 150th anniversary of the Civil War. 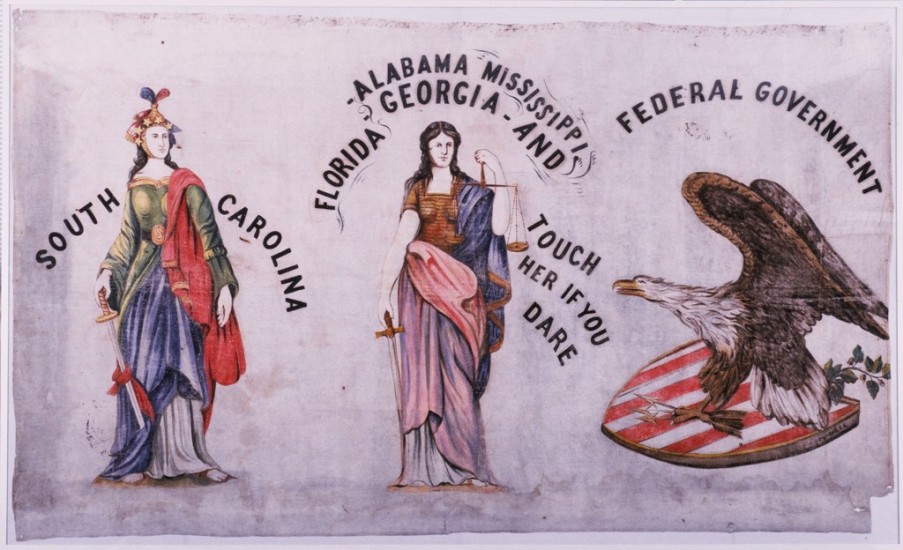 Carried through the streets of Savannah on the night of Dec. 26, 1860, this banner represents regional support of South Carolina’s decision to secede from the United States six days earlier. Prompted by the perceived threat posed by Abraham Lincoln and his Republican Party to the institution of slavery, South Carolina was the first to secede and declare its independence following Lincoln’s election as president the previous November. Six other states in the Deep South, including Georgia, followed suit during the early months of 1861. They would form a Southern Confederacy in March of that year.

The scene on the banner depicts a metaphor of Georgia, Florida, Alabama and Mississippi protecting South Carolina from attack by the United States. An American eagle symbolizes the Federal government, poised to strike against a woman cleaving a sword (South Carolina), protected by another woman with a sword and carrying the scales of justice and representing the other Deep South states. “Touch her if you dare” was a warning to the United States that if it tried to coerce South Carolina back into the Union, the other states would secede and defend her.

The artist, Fermin Cerveau, is best known for his painting of Savannah in 1837 (also on display in the reading room). 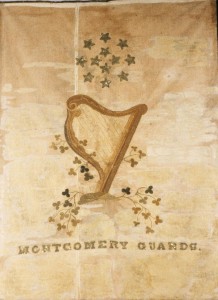 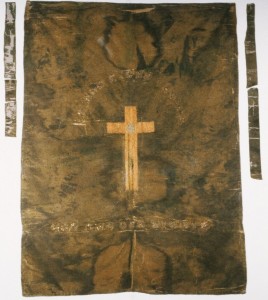 Attributed to the Sisters of Mercy
Silk and chenille<
On loan from the National Park Service, Fort Pulaski National Monument

Commissioned by Captain Lawrence Guilmartin to the Sisters of Mercy, the Montgomery Guards banner was presented to the company at Fort Pulaski on March 17, 1862. The front of the banner features a cross of gold chenille above which appears the motto “In hoc signo vinces” (in this sign you will conquer) and below, the words, “God and our rights.” The reverse of the banner shows a harp entwined with a shamrock, the name of the company, and twelve stars representing the Confederacy.

In a letter to General Moxley Sorrell dated Dec. 7, 1885, Charles F. Prendergast, recording Secretary of the Hibernian Society, places the flag on deposit with the Georgia Historical Society and describes the survival of the flag as follows:

This flag is a striking and interesting example of the proverbial devotion of true soldiers to their colors. Captured by the Federal forces at Fort Pulaski in April, 1862, it was, with extra ordinary skill and daring, saved by concealment about the persons of the men, who, after enduring many close examinations, and a long confinement in Northern prisons, brought it back triumphantly to the Confederate lines, when the command was exchanged in the following September. At General Johnston’s surrender, three years later, the flag (which had seen service from Fort Pulaski to Bentonville,) was saved again, tho’ the circumstances then were less remarkable than in 1862.

The Montgomery Guards were organized in Savannah in July of 1861 and initially served with the 1st Georgia Volunteer Infantry Regiment. They were part of the garrison at Fort Pulaski (where they were surrendered) and later served as Co. E of the 22nd Battalion Georgia Siege Artillery. 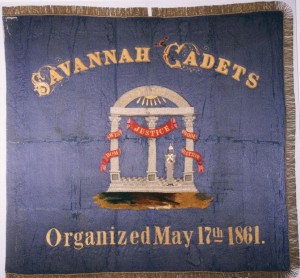 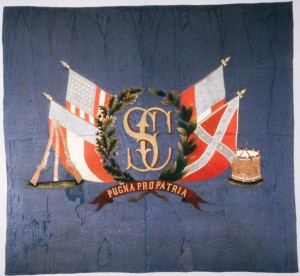 The Savannah Cadets company was organized on May 17, 1861 for home protection of Savannah, Ga., and its surrounding area. Membership was limited to boys between the ages of 14 and 17. The company was accepted into the service of the State of Georgia in February 1862 and joined the 54th Regiment of Georgia Volunteer, Confederate States Army, in May 1862 for the remainder of the Civil War. They surrendered with the army of General Joseph E. Johnston on April 27, 1865 in North Carolina. During the Spanish-American War, the company, enlisted as Company E of the 1st Georgia Volunteer Infantry Regiment, mustered into the U.S. Army on May 12, 1898, as Company K, 1st Infantry Regiment of U.S. Volunteers. 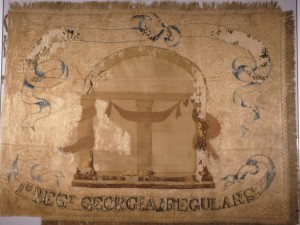 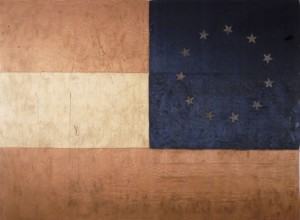 1st Georgia Regulars Infantry Regiment completed its organization at Macon, Ga., in April, 1861, and soon moved to Virginia. The men were from Atlanta and Brunswick, and Glynn and Montgomery counties. It was brigaded under General Toombs and in April, 1862, contained 367 effectives. Transferred to G.T. Anderson’s Brigade, the unit fought with the Army of Northern Virginia from the Seven Days’ Battles to Fredericksburg. It then was ordered to Florida, assigned to G.P. Harrison’s Brigade, Department of South Carolina, Georgia, Florida, and fought at Olustee. During the summer of 1864, it was stationed in the Charleston area and later saw action at Savannah and in North Carolina. Only 45 officers and men were left to surrender with the Army of Tennessee. 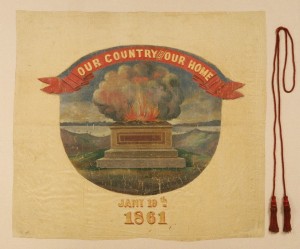 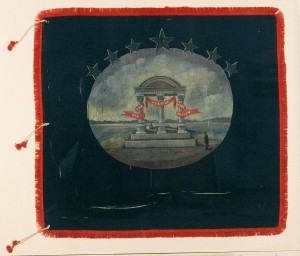