Exchanges in Slavery and Freedom

Exchanges in Slavery and Freedom

The First Great Awakening took place during the middle third of the eighteenth century, and created an emotional, inward looking spirituality in individuals who considered themselves to be going through the motions of established religious worship without a sense of true salvation. Charismatic, evangelist preachers such as George Whitefield led this spiritual awakening and touched the souls of plantation owners and slaves alike. While the Great Awakening did create some change between the encounter and exchanges between the enslaved and plantation owners, the Civil War and Emancipation created an entirely new landscape for everyone in Georgia.

In Liberty County, slaves in the tidewater planting region maintained communication and relationships with each other as they paddled along rivers and creeks and traveled over land on a network of pathways and trails, sometimes on official plantation business, other times in secret. In this way, the local Gullah culture grew and enriched the slaves’ lives to the extent that a person’s life in bondage could be. And John Lambert, to further enhance his own slaves’ lives and cultivate their souls, brought religion to his plantation every week. 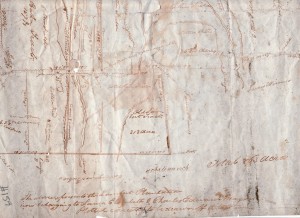 Lambert moved from South Carolina in 1784, established his Liberty County plantation in 1784, and hired a free black named Mingo to come weekly and preach to the slaves. More important was what Lambert did upon his death. In his will he requested that his estate “be kept together and the yearly income applied to any good purpose at the discretion of my executors and trustees, for the relief of the poor and distressed.” Lambert, as a Liberty County patriarch and respected authority figure left the community something with which to carry on.

His original thirty-one slaves and their descendants worked for the next fifty years until the Lambert trustees determined that the plantation became too much to manage and decided to sell the land and slaves.  During that period, Lambert’s slaves worked free of white oversight except for the infrequent visits of the trustees’ overseer.  Because of this, Lambert Plantation became a center of Gullah life where old traditions, immersed in magic and superstition, thrived and mixed with Christian practice.  It was precisely in this secret world that another “awakened” slave owner sought to influence others using the word of God.

Charles Colcock Jones, a respected Georgia Presbyterian minister, held title to three plantations in Liberty County: Montevideo; Maybank; and Arcadia; and his slaves were part of the local Gullah community.  Jones  felt  an  obligation  to  bring  his  slaves  closer  to  God  through evangelism. He published numerous works on the subject including A Catechism for Colored Persons (1834) and The Religious Instruction of the Negroes in the United States (1842).

Jones wrote that responsibility for the evils of the slave trade rested with Great Britain, but because the institution was so firmly entrenched in American society God required slave owners to fulfill their obligations as masters and “guardians” and teach their slaves the ways of the Gospel. Jones’ influence reached many plantation owners. Much as the master and servant relationship existed between God and His followers, so too did the master-servant relationship exist between whites and blacks. It became better understood as a paternalistic relationship.

The Plantation as a Cultural Landscape

A New Theory to Consider

Lately, the phrase cultural landscape is applied to a wide variety of both historical and contemporary subjects.  Whether studying each within its own borders or in a survey of multiple sites across the South, examinations of plantations require a look at numerous aspects of both African and American cultures.  Issues sparking debate today include the role of women on the plantation, the influence of African culture on white society, the devaluation of the role of paternalism, and the extent to which slaves used religion in resistance.  Also gaining attention are the ways in which architecture and the positioning structures on the plantation reflect not only social status, but also the dissemination of form, style, construction techniques, and patterns of use. 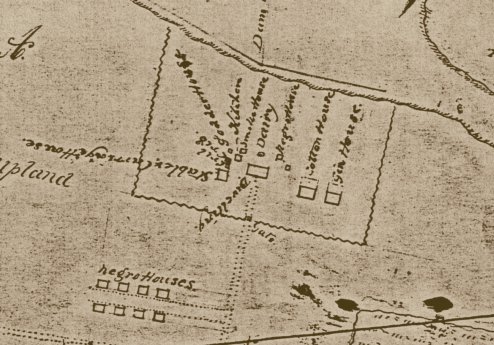 A New Landscape for Freed Slaves

The Example of Sandfly, Georgia

When Union General William Tecumseh Sherman took Savannah in December 1864, he conducted an interview with local black leaders to gauge their knowledge, support for the Union, and ability to sustain themselves if freed from slavery.  Sixty-seven year old local minister Garrison Frazier was selected to speak for those present.  When asked if he thought blacks should live among whites or by themselves, he replied, “I would prefer to live by ourselves, for there is a prejudice against us in the South that will take years to get over.”

Many former slaves settled together in areas such as Sandfly forming closely-knit, supportive networks of families. Plantation work experience formed the foundation of African- American trade skills such as carpentry and masonry, so the settlement progressed without help from outside builders and planners. In Sandfly, tradesmen passed their skills from one generation to another through community house raisings and by running family businesses.   Nearly every Saturday found the Sandfly community raising a new home. The process created a “skill pool” from which Sandfly residents called upon the specialties of individuals.  Brick masons, plumbers, carpenters, and electricians all gave their talents freely to community building.  Family members joined the construction: children worked as apprentices or gophers; the wives provided a buffet of food.

The residents of Sandfly shaped their landscape so that churches occupied focal points within the village and families stayed close together.  Building skills formed the basis for many slave descendants’ livelihoods, and Sandfly tradesmen found jobs constructing Savannah area roads and buildings.  This connection to the land generated a strong attachment to the area. Even today, this devotion remains strong in Sandfly where the residents recently challenged the establishment of a Wal-Mart superstore. 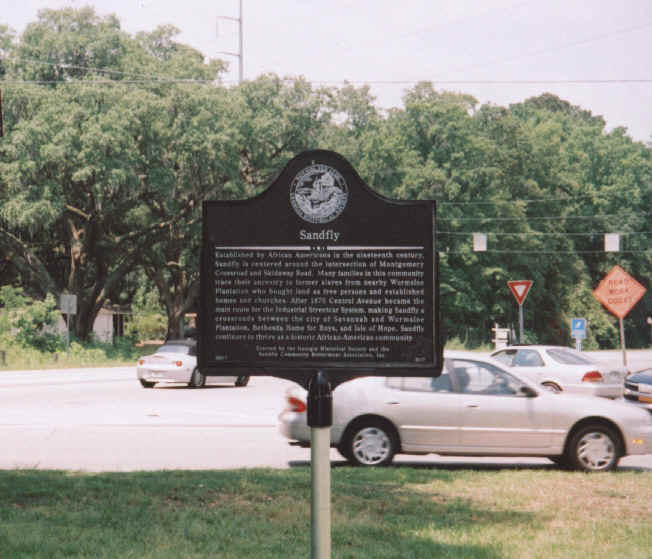