Economics greatly shaped the encounters and exchanges between enslaved peoples and the environment, each other, and plantation owners. The economic prosperity brought to Georgia through staple crops like rice and cotton meant an increasingly heavy dependence on slave labor. The from of labor, whether it be a task system or a gang system, greatly shaped they encounters and exchanges occurring on the plantation landscape, and impacted life and society after the end of slavery. 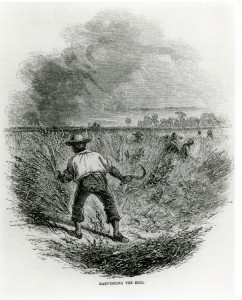 Print “Harvesting the Rice.” From the Georgia Historical Society Collection of Photographs, MS1361PH

Long before cotton became king, rice ruled the low country.  In Georgia, as in South Carolina, a caste of elite planters quickly established itself after Parliament removed the export duty on rice and royal policy lifted limitations on the number of land grants to individuals. Planters grabbed prime rice-growing land by the thousands of acres. Soon fewer than five percent of Georgia landholders owned twenty percent of the land – a situation the founding Trustees had hoped to prevent. The popularity of the labor intensive crop led to a heavy dependence on slave labor. Soon slaves outnumbered whites in the coastal low country.  After the slaves harvested the rice, the Atlantic trade system carried it to locations as far away as South America and Europe. 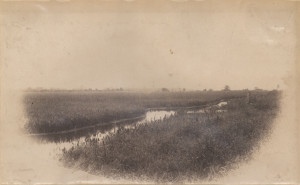 The rice country slave system initially took after the structure employed in the West Indies. It resembled a harsh gang system of long, hard days in marshy fields and a whip-bearing overseer close behind.  Because of slave resistance, this form gave way to a more lenient task system which allowed slaves to have time to themselves once they completed their given tasks.  Getting to the fields early and working hard allowed the slaves to enjoy time together later in the day and tend their own gardens and livestock.  Under this structure, imported slaves saved many of their traditions and language. They adapted and combined  their  diverse  ways  into  an  amalgamated “Gullah” culture and speech.  Gullah culture formed the basis for many slave communities. A significant one existed in Liberty County.

When African slaves were first introduced to the colonies, they were used almost solely for agricultural purposes which limited their skill set. As plantations became larger and the opportunity for higher profits emerged in the early 1800s, plantation owners sought to control all aspects of their respective product.  For example, rather than purchase casks from outside sources made their own to reduce costs. By doing so they could lower their overhead, influence prices, and maximize profits.  This meant expanding their slaves’ skill set by forcing them to work all aspects of plantation life in order to achieve self-sufficiency.

By the beginning of the nineteenth century, new technology used in rice production began replacing laborers. Tidal irrigation for instance required fewer slaves to water the crops, so plantation owners pulled some of their slaves from the field. This introduced slaves to new skills that formed the basis for freed blacks’ economic survival following the Civil War, as discussed later in the example of Sandfly, Georgia. 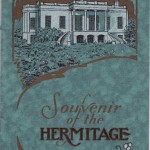 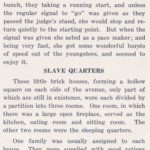 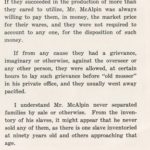 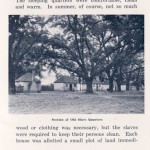 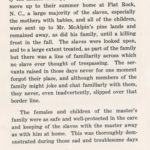 Souvenir of the Hermitage by Henry McAlpin, From the Georgia Historical Society Rare Pamphlet Collection. This excerpt provides a description of the slaves’ quarters at the Hermitage Plantation

Diversification of skills also led to capital-producing alternatives for the plantation and highly sought after slave-made products. An example from the Savannah area that continues to draw attention is Savannah Gray Brick. The brick, once called McAlpin’s Gray Brick, originated from the gray clay on Henry McAlpin’s Hermitage plantation located on the Savannah River.  The Hermitage was a prime example of a diversified plantation.  McAlpin operated a lumber mill and foundry in addition to his rice plantation and brick kilns.  The Hermitage brick business boomed during Savannah’s recovery after the1820 fire, and the brick can still be found forming the walls of many historic Savannah buildings. 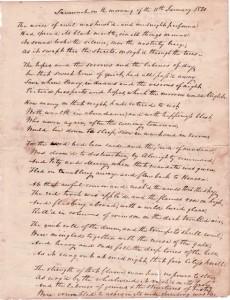 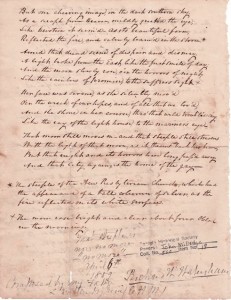 “Savannah on the Morning of the 11th January 1820,” a poem by Richard W. Habersham. From the Milledge Family Papers, MS 560.
View Transcript

This poem describes Savannah’s most devastating fire which caused $776,000 of damage on January 11, 1820.  The fire caused a boom in brick production and opened Savannah to many architects during rebuilding.

As land opened for settlement in the western and northern regions of Georgia (see the Three Centuries of Georgia History online exhibit for discussions of the gold rush and Indian removal), planters had to find new agricultural means to take advantage of it.  Rice, the backbone of the agrarian economy of coastal Georgia, required the long growing season and extensive irrigation found in the Southeast’s tidal areas.  Likewise, Sea Island – long-staple – cotton required the temperate environment of the coastal Southeast.

Short-staple cotton, a hardier plant which grew in a wide variety of soils and climates, seemed to be the answer. As cotton’s popularity grew, so did the numbers of slaves needed to clean the labor-intensive short-staple cotton that could grow throughout the state. Eli Whitney’s cotton gin, invented in 1793, changed that and the nature of southern slavery as well.  Because the cotton gin made cleaning short-staple cotton easier, more planters invested in the crop. Both these factors led to a rise in slavery in western and northern Georgia. By the eve of the Civil War, slavery was firmly entrenched from the Atlantic coast to the Mississippi River and from the Gulf of Mexico to Arkansas. 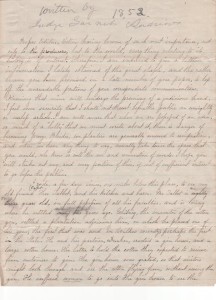 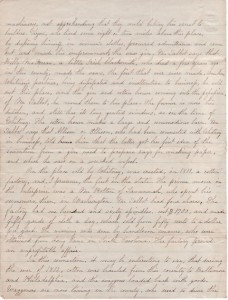 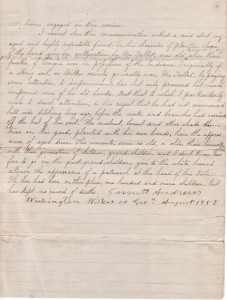 Letter from Garnett Andrews to the editors of Southern Cultivator, August 1852. From the Garnet Andrews Letters, MS 9.
View Transcript

Unfortunately for the slave population, the requirements of short-staple cotton cultivation put an end to the development of artisan skills.  While slaves in coastal Georgia continued to develop these skills, millions of slaves who moved from the coast to the uplands of the South found themselves living the harsh life of the gang system.  Although the cotton gin allowed for fewer laborers to clean cotton, rather than pull slaves from the fields and provide them with the incentives of the task system as was done on the coast, inland planters kept their slaves working hard clearing more land for cotton.

Between the Revolutionary War and the Civil War, the master/slave relationship of southern cotton culture witnessed the same challenges to the gang system as along the coast.  Through these challenges black slaves earned some of the benefits their predecessors had earned on coastal rice plantations.  One of the most enduring institutions born and cemented into black life during this time was the importance of the Church.  Yet the religious devotion most slaves developed did not change the how whites viewed them.

The notion of white supremacy took on a new justification in the mid-nineteenth century.  White supremacists used biological, religious, and paternal excuses to justify inhumane slave treatment. This led to an intensified relationship between whites and blacks.  Ira Berlin, in Many Thousands Gone, stated,

Slaveholders discovered much of value in supremacist ideology.  The inferiority of black people confirmed the necessity, if not the benevolence, of mastership. Planters elaborated such notions, sometimes endowing black men and women with a vicious savagery and sometimes with a docile imbecility.  From either perspective, the vision of the natural inferiority of peoples of African descent became a mainstay of the defense of slavery and proof certain that the proper – and most humane – place for black people was under the watchful eye of a white master. (p. 363)

Continue to Exchanges in Slavery and Freedom