The first encounters between European inhabitants and enslaved Africans in Georgia occurred very soon after settlement. Despite the Trustees’ policy prohibiting slave ownership, the colonists had no qualms about borrowing slaves from South Carolina and often did so. For example, South Carolina’s Governor Robert Johnson and Assembly Speaker Paul Jenys loaned black sawyers to help clear Savannah and Ebenezer for settlement.

Slavery in the Georgia Colony 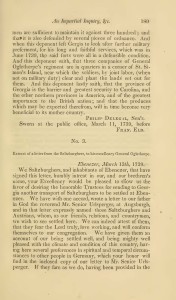 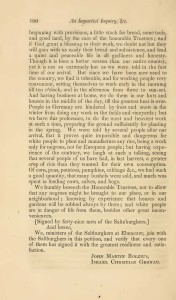 This portion of “An Impartial Enquiry” includes a petition signed by members of the Ebenezer community asking the Trustees to allow more Salzburgers to settle in Georgia and to not allow the use of slaves in the colony.

Exchanges among Georgia’s inhabitants became heated as a group of “malcontents,” led in large part by Lowland Scots who settled in Savannah, demanded that the ban on slavery be lifted because of the poor economic conditions. The Trustee’s supporters, led by Boltzius at Ebenezer and the Highland Scots at Darien, objected and fought against lifting the ban. In England, the Trustees held Ebenezer up as an example of hard working white families achieving success without the use of slaves. The malcontents countered that these supporters and success stories came from only those groups that continued to receive substantial funding from the Trustees or religious entities in Europe. Meanwhile, rice planters from South Carolina foresaw a collapse of Georgia and hoped it would be integrated into South Carolina. Many speculators began to grab rice-growing land and some brought slaves in illegally to begin working the land. 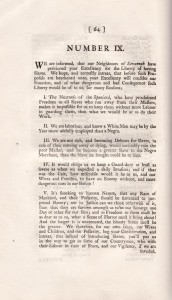 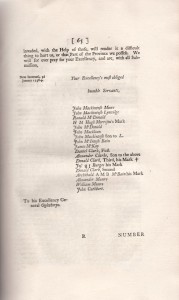 This portion of “An Account” shows the reaction of Trustee supporters in the Darien community to the malcontents call for the end of the prohibition on slavery.

The argument for slavery won out, and the institution legally came to Georgia on 1 January 1751. With the addition of slavery, and with the Trusteeship giving way to royal control in 1752, Georgia finally became a typical colony of the British empire found throughout the world. As such it lured more merchants, speculators, and planters than it was able to do without slaves.

Few if any slaves came directly from Africa during the first fifteen years of legalized slavery in Georgia. Many were “seasoned” slaves from the West Indies, but most came via South Carolina slave traders or were brought down by South Carolina planters operating in Georgia. Georgian planters came to believe that slaves from Carolina or Caribbean locations were unacceptable elsewhere and that Georgia might be little more than a last resort for slavers to dump undesirables. By 1765 however, Georgian planters established their own direct links to Africa’s Windward Coast. For the next one hundred years African slaves and their offspring formed an unwilling, unfortunate labor force that became essential to the growth and development of Georgia.

Below are tables originally published in a 1984 edition of The Georgia Historical Quarterly. The tables provide statistics on the early days of slavery in Georgia. 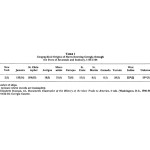 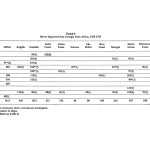 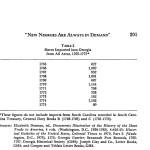 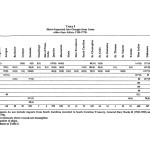 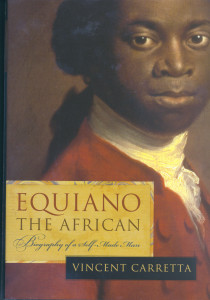 As Georgia’s planter class established new connections in Africa, Savannah hosted a unique world traveler. Olaudah Equiano, the subject of Vincent Carretta’s latest book and his August
2007 GHS lecture, wrote one of the earliest slave-narratives in which he recounted his time on the eighteenth century high seas, his passing from one master to another, his conversion to Christianity, and the purchase of his own freedom in 1766. Although Equiano told tales of friendships found in Savannah, the port city hardly extended a warm hand of welcome.

During Equiano’s 1765 trip to Georgia, his second time to the colony, he suffered a severe beating at the hands of two white men. Equiano had been visiting a group of Savannah’s slaves when his hosts’ master, an inebriated Dr. Perkins, and one of Perkin’s white servants, beat Equiano so severely that local doctors felt he would not survive. Dr. Perkins went unpunished for his behavior, but another physician, Dr. Brady, cared for the wounded Equiano and helped bring about a full recovery. It took four weeks before Equiano could return to his ship where Captain Thomas Farmer and the crew anxiously awaited his return due to Equiano’s master seamanship. 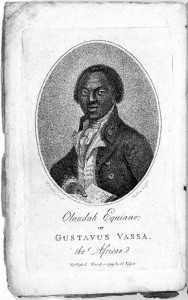 On another trip to Georgia, a visit to enslaved friends once again sparked conflict between Equiano, then a free man, and white inhabitants in Savannah. This time, while visiting his friend Mosa, city watchmen took Equiano into custody citing a city ordinance that prohibited blacks from having a light on past nine o’clock. Because the slaves in the house had a master to vouch for them, only Equiano was taken, despite his status as a free man. In the morning, two black Savannahians were flogged and Equiano feared the same punishment, for the more he openly questioned the legality of this action, the more it seemed inevitable. Finally, Dr. Brady was called and Equiano went free without harm.