The European age of exploration began in earnest in the fifteenth century as rulers sought better access to the Far East where they could trade for spices, silk, tea and other highly valuable goods. In the Southeast, Spain, France, and England all vied for control. In an attempt to find a new route to the Indies, Europeans stumbled upon the “New World.” The native populations of North and South America were forever changed as a result of European exploration and settlement. Many natives perished as a result of exposure to European diseases and weapons. The native populations also underwent political, social, and cultural changes as a result of European influence.

Spanish explorers and missionaries left some of the earliest, most thorough accounts of Native Americans living on the land that later became Georgia.  Their writings sketch a picture of encounters that changed the native tribes forever and shaped the way in which natives dealt with succeeding Europeans. From 1539-1543, rumors of riches equal to those of the Aztecs spurred conquistadors to explore North America to satisfy their lust for glory and wealth. The most famous Spanish conquistador in Georgia’s history is Hernando de Soto. 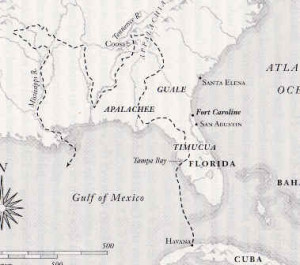 De Soto’s and his six hundred men  trekked diagonally from the southwest corner of the future state to a point on the Savannah River just below modern-day Augusta.  De Soto and his men documented villages and towns by the names of the Indian societies and chiefdoms they encountered: Capachequi, Toa, Ichisi, Altamaha, Ocute, Patofa, and Cofitachequi.  Reactions to the Spanish varied.  Some tribes hid, others offered food and clothing, and some attacked the strangers.

The exchange between the two cultures during the Spanish march was one-sided and destructive.  De Soto’s path through the Mississippian cultures of what is now the southeast United States spread disease among the local inhabitants, diminished native food supplies, and led to a reduction in native populations.  Resisting tribes found themselves under vicious attack by Spanish soldiers.  De Soto employed violent tactics to obtain food for his men, while the herd of pigs he brought with him further reduced villages’ food sources as they consumed crops such as corn and squash.  De Soto’s men carried iron collars and chains to physically enslave Indians. They used torture to extract information about gold and silver, ransacked villages, and dug up graves in search of the nearly non-existent precious metals.  Women were taken from their villages for pleasure and trade, and men and boys were enslaved to carry bags.  Those who escaped found themselves hunted by men on horseback in what de Soto considered a sport.

The archaeological record confirms the one-sided exchange resulting from de Soto’s march through Georgia and much of the Southeast.  Skeletal remains of Indians bear the scars of steel weapons.  Excavations show a rapid and drastic reduction in the number of natives in once highly populated areas.  Records of later European arrivals account for only a fraction of past Native American numbers.  Though not all of the Spanish groups were so deliberately violent, the Spanish crown continued to seek new ways to subdue the native population in the New World. Yet even their later tactics proved equally destructive.

By the 1600s the Spanish economy began to weaken, so the monarchy put an end to the expensive, unproductive conquests of explorers like de Soto. The Spanish established outposts on the Atlantic Coast to protect their shipping ports and territory in Florida from French and English pirates, as well as promote settlement expansion. 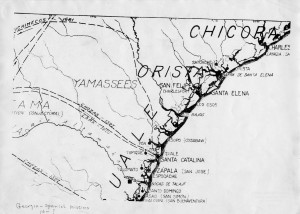 Spanish map of the coasts of South Carolina and Georgia, 1925. From the Georgia Historical Society Map Collection, MS 1361-MP

In Georgia, Spanish Franciscan monks established missions in a region they called Guale after the dominant native people in the area.  Their goals centered on establishing control over the coastal Indians by converting them to Christianity, teaching them the Spanish language, and developing what amounted to a feudal system under which the Indians served as peasants.

For the most part, the Franciscan monks achieved their goals, but at large costs to Native American culture. Games, marriage practices, ways of worship, and styles of dress were changed or eradicated to conform to Christian principles.  Those who rebelled against change were whipped or suppressed and often killed. European diseases continued to plague the Indians which weakened many tribes. Several chiefs hoped that accepting the Franciscan ways would keep their people safe from disease, continue the flow of technologically advanced items into their community, and keep them more powerful than neighboring chiefdoms.

European nations vying for control over North America took advantage of the competitiveness between chiefdoms and promised each of them more technologically advanced weaponry and everyday items.  The Native Americans soon found themselves  playing a crucial and multifaceted role in international politics and economics. Their encounters with Europeans were no longer one-sided, as Native Americans unknowingly or not helped foster European economic, social, and military success in the North America.  As author and speaker in the GHS 2007 lecture series Alan Taylor observed,

Because of their resilience, Indians became indispensable to the European contenders for North American empire.  On their contested frontiers, each empire desperately needed Indians as trading partners, guides, religious converts, and military allies.  By the late seventeenth century, the imperial contests were primarily struggles to construct networks of Indian allies and to unravel those of rival powers.  Indian relations were central to the development of every colonial region. (American Colonies, p. 49)

Before the English colonized Georgia, the region became a “debatable land” between England’s Carolina claims and Spanish Florida.  Neither nation had a strong presence in what is now Georgia until James Oglethorpe’s arrival in 1733, so creating alliances with Indians offered England a way to gain and hold a buffer area and maintain trade in animal skins and Indian slaves.  As the English presence grew,  the Spanish lost their toehold in Georgia.

Native American slave traders from Virginia and Carolina often armed tribes, such as the Westoes on the Savannah River, in exchange for Indian slaves and animal skins.  The settlement of Charles Town, later known as Charleston, SC, in 1670 sped up the process of Spanish removal from the Georgia territory.   Settlers here set one Indian tribe against another.  In one agreement, the Savannahs were armed and set against the Westoes who were largely annihilated or enslaved.  The Guale, because they understood  Christianity and European ways, were a prized commodity for slave owners and the Spanish missions suffered heavy losses as a result of slave raids.  Some Native Americans living on Spanish missions chose to voluntarily relocate to areas near Charles Town in order to establish a trade relationship with the seemingly more powerful English.  Others went into the western interior where they joined the Creek nation.  Spanish missions closed one-by-one, each time consolidating southward. By the early eighteenth century, the Spanish found themselves behind the walls of St. Augustine, Florida. 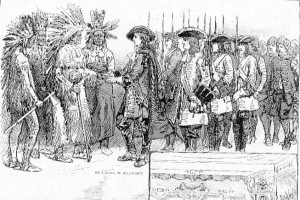 The results of English encounters with Native Americans during the late seventeenth and early eighteenth centuries were drastic.  Tribes disappeared, moved, or realigned themselves with other communities due to English enslaving practices, trade with European powers, and disease epidemics.  Indians learned the importance of making alliances with any European power – English, Spanish, or French – vying for a place in the southeastern regions in order to reap the benefits of their favor.  These encounters led to the conditions under which James Oglethorpe established Georgia.  When he and the settlers stepped foot on Georgia soil, the new colony contained only a fraction of the area’s original natives. Those who greeted him were already well experienced in European ways.

Continue to Encounter and Exchange in A New Colony