Encounter and Exchange in a New Colony

Encounter and Exchange in a New Colony

Numerous “push and pull factors” encouraged a wide range of peoples to leave the Old World, and even other colonies, to settle in Georgia. This created new encounters and exchanges among groups that otherwise might never have met. Furthermore, lessons had been learned during the establishment of the other twelve English colonies, and all of the imperial nations had learned a thing or two about how to incorporate the Native Americans into their plans for colonial expansion.

James Edward Oglethorpe recognized the need to forge new friendships with the Indians of Georgia if his colony hoped to be a success. Likewise, many local natives understood from past experience that establishing a peaceful trade system with the white settlers would keep them competitive with rival villages or nations and would offer a powerful ally in case of attack by other white nations such as Spain. Debates on these issues became heated among Native Americans. In coastal Georgia, questions of alliances caused a split among Creek and Yamasee Indians. Some of these Indians formed a new tribe called the Yamacraw, and it was their chief, Tomochichi, who greeted Oglethorpe. 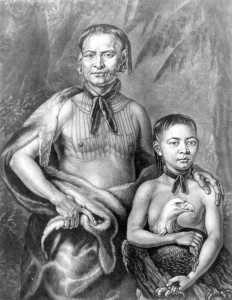 Portrait of Tomochachi Mico or King of Yamacraw and Toonahawi his nephew Son to the Mico of the Etchitas. from the Georgia Historical Society Collection of Photographs, MS 1361

Their first official exchange was a ceremony of speeches and gifts. During the meeting, the Yamacraw granted Oglethorpe and the passengers of the Ann permission to settle on Yamacraw Bluff. One of the gifts from Tomochichi to Oglethorpe, a buffalo skin, indicated the chief’s knowledge of European power and his hope for future good relations. The skin, he said, represented strength, and the eagle painted on it signified speed, both of which described the English. Additionally, he added that the Eagle’s feathers were soft, and stood for love, and that the skin, a symbol of warmth, meant protection. These he hoped to receive from the English.

Tomochichi proved to be a helpful ally to the fledgling colony.  At Oglethorpe’s request, Tomochichi arranged for a delegation of Lower Creeks to come to Savannah and renegotiate previous agreements that prevented English settlers in South Carolina to cross the Savannah River.  For his part, Oglethorpe drew up a schedule of prices to be used in trading exchanges to prevent English traders from taking advantage of the Indians.  Oglethorpe also took Tomochichi, some of his family, and five other natives to England.  The trip was part a marketing ploy for the new colony as well as a chance to impress the Native Americans with England’s power – something Oglethorpe undoubtedly hoped would spread by word of mouth once the Indians returned home.

Oglethorpe’s negotiating skills with the Indians and his concern for their well-being greatly benefitted Georgia by establishing borders between Indians and white settlers and by making crucial allies against the Spanish. But without one person in particular, a trader of both Indian and European blood, the meeting between Oglethorpe and Georgia’s Indians might have been one of misunderstanding, suspicion, and war. 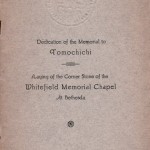 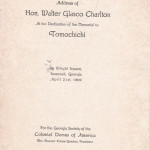 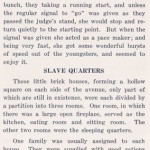 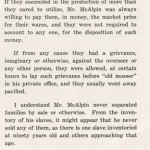 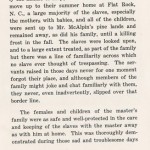 Dedication to the Memorial of Tomochichi, April 21, 1899. From the Georgia Historical Society Rare Pamphlet Collection.

Born to a Creek woman and an English trader named Edward Griffin, the “half-breed” woman Coosaponakeesa knew both European and Native American cultures intimately.  After her marriage to John Musgrove around 1725, Mary, as she was known in English, established a trading post with her husband near the Savannah River.  When Oglethorpe met Mary he quickly realized the advantages of her linguistic skills, knowledge of native cultures, and experience trading with Indians.

The encounter and exchange between Mary Musgrove and James Oglethorpe benefitted the broader exchange between the English and Native Americans during the developmental years of the Georgia colony.  Musgrove, acting as an interpreter and negotiator, helped Oglethorpe secure land and trade treaties, and she never failed to gather Creek allies against the Spanish.  Unfortunately, the relationship between Mary Musgrove and the Georgia Trustees was marred when the Trustees failed to pay Musgrove for her services and broke ties with her. The move threatened Georgia’s alliances with the Native Americans. Creeks rallied to support Musgrove by marching through the streets and yelling and shooting into the air, causing many to fear an Indian war against the settlers.  Finally, after the Trustee period came to an end, the royal governors John Reynolds and Henry Ellis paid Musgrove from the sale of two Georgia islands, Ossabaw and Sapelo, and granted Musgrove and her third husband, Thomas Bosomworth, the island of St. Catherines.

Because of Mary Musgrove’s assistance, Georgia became an excellent military buffer against the Spanish.  The decreased tension between the English and Spanish in the Southeast directly affected the settlement of Georgia and created opportunities for various European groups of differing economic and religious backgrounds to begin anew. 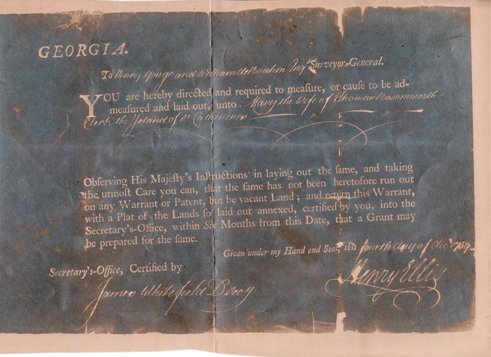 Photocopy of formal instructions from Governor Henry Ellis to Henry Yonge and William de Brahn, instructing them to survey and lay out Saint Catherines Island for Mary Musgrove Bosomworth.

Continue to An Early Melting Pot