When most Americans discuss the Civil Rights Movement, they are referring to the movement to end segregation and secure equal rights for African Americans begun int he mid-1950s and peaking in the 1960s. However, the organized struggle for equal rights began with the generation of African Americans who had experienced life as slaves. Not only did this struggle lead to tense encounters between people of different races, it also revealed differing viewpoints among the races. “Some efforts of American negroes for their own social betterment…together with the proceedings of the Third Conference for the Study of the Negro Problems, held at Atlanta University, May 25-26, 1898.” edited by W. E. Burghardt Du Bois. From the Georgia Historical Society Rare Pamphlet Collection.

In April 1905, a group of Savannah’s black elite established a dual-natured activist organization – one part civil activism, one part protest – called the Savannah Men’s Sunday Club. Professors of the Georgia State Industrial College for Colored Youth founded the club in order to discuss resolutions to local race issues that were steadily reflecting the Jim Crow and segregationist atmosphere pervading the South. Savannah’s “Talented Tenth”, a phrase coined by Booker T. Washington, set out to educate the populace on matters concerning public health, education, and enfranchisement through lecture series, church preachings, and publications in the Savannah Tribune, the city’s African-American newspaper. They were also determined to bring their cause to the white citizens of Savannah through boycotts, demonstrations, and meetings with city officials. “Down in Ga, Savannah.” Photograph from the James S. Silva Family papers, MS 2126.
This picture was taken near Savannah and exemplifies the conditions that groups such as the Savannah Men’s Sunday Club hoped to change.

Savannah’s Sunday Club publicized many of the state’s most promising black activists of the time such as W.E.B. du Bois and Henry Hugh Proctor.  The most instrumental individual in the club’s founding was Monroe Nathan Work, a graduate of the University of Chicago’s masters program in sociology, who brought with him a desire to educate both blacks and whites on the sub-standard quality of life plaguing African-Americans throughout the country.

During the organization of the Savannah Men’s Sunday Club, W.E.B. Du Bois contacted Monroe Work and requested that he endorse what became known as the Niagara Movement.  The movement provided an alternative to Booker T. Washington’s accommodationist stance and challenged Jim Crow laws and racial violence through open action.

Du Bois, who was politically active in Georgia since taking a position at Atlanta University in 1897, also recruited (among others) Henry Hugh Proctor, an Atlanta pastor, and William Jefferson White, the radical publisher of the Georgia Baptist in Augusta.  Du Bois placed high regard on local “race men” to carry out the movement in their various communities. Du Boise obtained more active members from Georgia than from any other state.  These men had all been politically active in the past, and their experiences, when pooled together, established a solid network of activism throughout Georgia.  The movement proved short-lived, however, as the 1906 gubernatorial campaign became heated with racist rhetoric and eventually, racial violence. 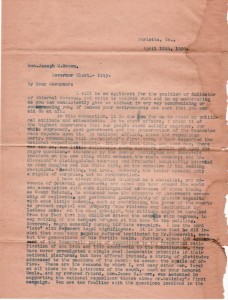 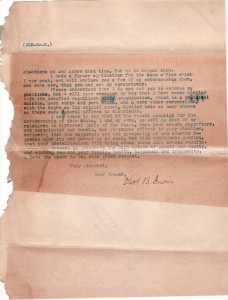 Letter from Thomas Irwin to Governor-Elect Joseph Brown, 1909. From the Thomas B. Irwin Correspondence, MS 418.

This letter demonstrates some of the obstacles facing black Georgians in the age of “progressivism” and the need for the Niagara Movement.

Impact of the Atlanta Race Riot

The effectiveness of the Niagara Movement and the Savannah Men’s Sunday Club diminished in 1906 after the bloody Atlanta Race Riot and the subsequent cementing of Jim Crow laws in Georgia.  Even in Savannah, where politicians were slow to adopt Jim Crow laws, the black community found themselves under new and intense pressure. Although black Savannahians boycotted the streetcar lines after their segregation in September 1906, costing the lines more than $50,000, the resolve of Southern whites proved too strong.  Many in the black community abandoned the Niagara movement after learning of the bloodshed in Atlanta.  They also witnessed the arrests of friends and family members on fabricated charges throughout Savannah as white police responded to a general fear of black activism.

The Sunday Club continued activities until 1911, but due to a lack of unity and apathy among many black elites it was much less a protest organization and more dedicated to civic improvements and accommodationism.  Even Monroe Work was of two minds.  Similar to H.H. Proctor, he believed that W.E.B. Du Bois and Booker T. Washington were “complementary opposites.”  After the failure of protest in Savannah, Work moved into the Booker T. Washington camp, accepting a position at the Tuskegee Institute in 1908.  His duality found a voice in later writings through which Work gave two purposes to black education, one part Du Bois, one part Washington.

Continue to Progressive Encounters with the Urban Environment