In Savannah, like other major cities at the time, progressives called for better sanitary conditions and more attention placed on public health. Civic and community organizations took on projects aimed at cleaning up Savannah and promoting healthy practices among the general public. In order to meet their progressive goals, desperate members of the community and local government had to encounter and engage each other and their fellow citizens. 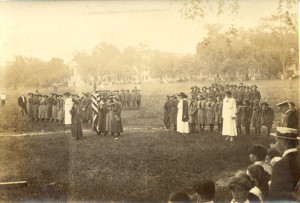 In the early 1900s, children became the focus of many charitable societies. Children even involved themselves in various new organizations such as the YMCA and YWCA, the newly formed Girl Guides established by Juliette Gordon Low, the Corn Clubs and the “Swat the Fly” Crusade.

The “Swat the Fly” Crusade marked a union of sentiments common in Savannah during the spring of 1912: the desire to keep children occupied and the need to promote public health. The campaign began on 10 April and officials opened it to anyone under seventeen years of age who wished to enter. No color lines were drawn. The Savannah Morning News conducted the program, basing it on similar events in other cities such as Atlanta. Children swarmed the office on 8 April to obtain their boxes into which they placed captured flies; he who turned in the most won $10.00. The program’s purposes lay in reducing the number of flies in the city, educating citizens to the dangers flies posed to public health, and how to prevent fly propagation. Various methods brought in flies by the hundreds of thousands. Stale beer proved successful, not only as a fly lure, but as a temperance lesson in the negative effects of alcohol. The Morning News noted that “assault and battery was common among the captured flies and disorderly conduct even among the most staid flies was the case without exception.” Eventually young George DeLoach, who employed stale beer as one of many methods, won the prize with a total of 2,199,200 flies.

The annihilation of so many flies and their potential offspring could do little in 1912 Savannah. As the public health crusade continued, city officials discovered such filth existing below Savannah’s surface, in places like the slums and city market, that they called for immediate and strict enforcement of existing ordinances, the passage of new ones, and ambitious sanitation programs. The Chamber of Commerce initiated a program to clean the slums and improve the “conditions that surrounded the poorer class of negroes of this city.”

Professor Richard Wright, president of the Georgia State Industrial School for Colored Youth and long-time scholar and activist for the self-improvement and education of blacks, brought the sanitation issues to the Chamber’s attention by sending them a letter describing the situation and included photographs to substantiate his claims. A city subcommittee was formed and the local Ministerial Association, superintendent of schools Otis Ashmore, and the Colored Civic Improvement League all joined in the crusade. Contests awarding cash and prizes were created to encourage participation in the clean-up and ministers and teachers pushed involvement in the churches and classrooms.

John Ihlder, field secretary of the National Housing Association from New York, came to advise city officials. He found many of housing areas to be overcrowded, breeding places for flies, and many homes to be damp and dark, some “practically built on quagmires.” He attributed one of the deadliest aspects of the slums to the “habit among the lowly negroes to keep their blinds and windows closed,” their homes almost never receiving the benefits of fresh air and sunshine. Ihlder stated that only education and missionary work would truly solve the problem.

As slum clean-up took off with enthusiasm, Savannah’s progressive leaders turned their attention toward edible product points-of-sale such as bakeries and the city market where produce and meat were sold.  A city inspector was appointed to make frequent inspections of the meats in the city market.  Meat packers claimed that speculative butchers often purchased large quantities of meat expecting a rise in prices.  The meat then hung in “cooling rooms” in the market basement where the temperatures did not keep the meat fresh long.  The basement became an eye-opening discovery comparative  to Upton Sinclair’s description of Chicago slaughter houses. 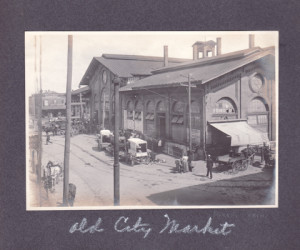 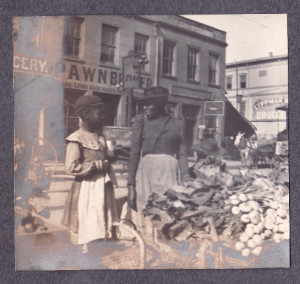 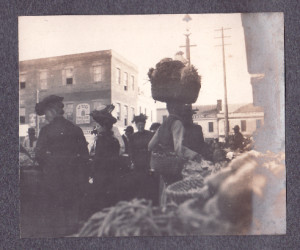 Photographs of the City Market from a scrapbook. From the James S. Silva family papers, MS 2126.

Throughout the month of June 1912, the city market dominated the local headlines. Dr. Craig Barrow, accompanied by a government expert familiar with the Chicago situation, found indescribable filth after inspecting the market’s basement. The smell overwhelmed the inspectors.  Grime covered the floor; dim, gas lanterns illuminated damp, moldy walls and piles of trash.  African-Americans had established restaurants there, some of them even taking up residence despite the awful conditions.  Amid the dreadfulness, butchers prepared meats, poultry, and sausage for sale to the public.  Store rooms housed vegetables. Flies and rats, though barely visible in the faint light, thrived in the squalor.  Immediate attention was needed.

Mayor Tiedeman, apparently frustrated with the slow progress of City Council and the Chamber of Commerce, took action and immediately put the city’s scavenger corps to work.  They did their job quickly and efficiently, removing wheelbarrow loads of filth and grime, washing the floors with fire hoses, and whitewashing the walls in a matter of days.  By the end of June, stall operators in the market claimed a much improved environment, especially in the reduction of flies present.  A plan was adopted to bring the market stalls and shacks operating in the nearby streets into the basement.   City leaders liked the idea for its dual nature; it cleaned the streets of congestion and unsightly vendor stands while simultaneously putting the basement to good use. The walls of the basement were to be replaced by steel girders and beams creating an open-air environment.  Store houses would remain in the four corners for the use of the retailers and market operators.