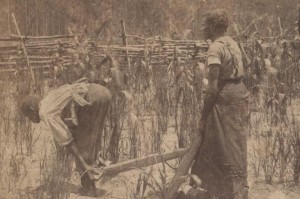 The Gullah and Geechee people inhabit lands stretching from the coastal sea islands of southern North Carolina to northern Florida and are known for their distinctive African-American culture. The term Gullah refers generally to the people of West African descent living in coastal South Carolina, while the term Geechee is applied to individuals of the same culture located in Georgia and northern Florida. Strong African links have been discovered in their language, religion, cultivation techniques, food, arts and crafts, music and dance. Since the Sea Islands are separated from the mainland of the United States, the Gullah and Geechee peoples have been able to preserve more of their African traditions and customs than any other African-American community in the United States.

The Gullah Geechee people are descendants of skilled agrarians from the Rice Coast of West Africa. The Rice Coast stretches from the coastal line of Senegal to Côte D’Ivoire (Ivory Coast). Scholars have used terms such as the Upper Guinea, Senegambia, and the Windward Coast to describe the rice-growing region of West Africa. This region of West Africa is home to several ethnic groups; however, most scholars believe the Gullah-Geechee descended from the Gola, Kissi, Bambara, Kongo, Igbo, Wolof, Mende, Temne, Twi, Serer and Vai groups. Members of these groups were often captured and sold as slaves due to their knowledge of rice cultivation

The West Coast Africans, who were captured by slave traders, endured weeks and sometimes months of confinement before they were shipped across the ocean to be sold at auctions in the United States, the Caribbean, and South America. The most dangerous part of the journey was the transatlantic crossing known as the Middle Passage. This part of the voyage lasted for an average of sixty-six days. During this sixty-six day period conditions on the slave ship became increasingly inhumane and unsanitary, leading to the deaths of many enslaved Africans. According to Olaudah Equiano, an enslaved African who survived the Middle Passage, “The closeness of the space, and the heat of the climate, added to the number in the ship, which was so crowded that each had scarcely room to turn himself, almost suffocated us. This produce copious perspirations, so that soon the air became unfit for respiration, from a variety of loathsome smells, and brought on a sickness among the slaves, of which many died.”

West Africans who survived the Middle Passage and bound for sale in North America usually arrived in one of the two major ports for slave importation: Charleston, South Carolina and Savannah, Georgia. Scholars consider Charleston the more significant of these two ports for the importation of slaves into North America. In the eighteenth century, half of the slaves coming to North America arrived in Charleston. While Savannah’s port did not support the same importation numbers as Charleston, it did host what was likely the largest slave sale in the history of the United States. The auction took place in March 1859, and was a two-day event that came to be called the “Weeping Time” by those who endured it. Most of the West Africans who arrived in either Charleston or Savannah remained in the area working on the rice plantations. On the coast of South Carolina and Georgia, in an area known as the lowcountry, rice was a major cash crop, outselling both indigo and Sea Island cotton. Lowcountry plantation owners preferred to purchase slaves that came from the Rice Coast because they were already accustomed to the cultivation of rice and were better acclimated to the region’s hot, humid climate. Plantation owners also believed they were more resistant to diseases such as yellow fever and malaria, which were prevalent on both the Rice Coast and the lowcountry. As a result, plantation owners and their families often traveled north to escape the summer heat and diseases, leaving slaves on the plantations with little supervision.

[symple_toggle title=”The Lowcountry and the Institution of Slavery”] 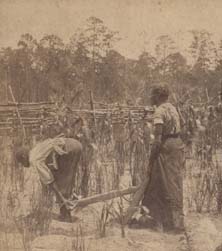 The institution of slavery in the lowcountry was different from the institution of slavery on the mainland. Slaves on the Sea Islands worked under a system of labor organization called the task system. Under this system, slaves were assigned specific tasks to complete during the day, often with little or no supervision. It was common for assignments to begin at sunrise and be completed between one o’clock and four o’clock in the afternoon. After the days tasks were completed, slaves were often allowed to use the remaining time as they wished. The presence of this unsupervised leisure time allowed slaves of the lowcountry to practice their traditional religious beliefs, arts and crafts, language, and cooking styles. Since many of the slaves were from different African groups their activities began to blend the beliefs and traditions of all of the ethnic groups into one culture that became distinctive to their Gullah-Geechee descendants.
[/symple_toggle]