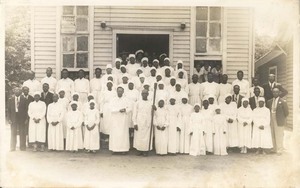 The distinctive religious practices of the Gullah/Geechee communities contain influences from several cultures, much like other aspects of their culture.  The three main influences on the development of Gullah/Geechee religion were: Christianity, Islam, and traditional West African practices.  This section will examine how these three influences coexisted in the Lowcountry and eventually fused to create the unique belief system of the Gullah-Geechee people.

Many evangelical Christian preachers, both black and white, openly opposed the institution of slavery.  They developed the idea millenarianism which proclaimed slaveholding was a sin and like all sins would eventually be punished by the Christian God.  This idea of a vengeful God appealed to the enslaved people of the lowcountry because it offered them hope of obtaining freedom and seeing their oppressors punished.  Enslaved persons used this message of millenarianism for their own understanding of the Bible, especially the Old Testament. They often compared their oppression with the story of the Israelites who were in bondage under the King of Egypt for four hundred years.  As the story goes, one day, after four hundred years, the God of the Israelites sent Moses to tell the King of Egypt to release the Israelites from bondage.  After the King refused several times, the God of the Israelites sent many plagues which nearly destroyed Egypt.  This story explains why the slaves never lost hope in a “Savior” to rescue them.

Christianity of the lowcountry Gullah people was slightly different from that of the churches outside the community.  The Gullah people were primarily under the auspices of Baptist or Methodist churches.  Since the 1700s, slaves in the lowcountry were attracted to “Evangelical Protestantism.” Evangelical Protestantism includes Calvinist Methodist, Arminian Methodist or Baptist (which includes Arminians and Calvinists).  This branch of Christianity promoted equality between blacks and whites inspiring both to achieve the “born-again” experience.  In addition, Baptists and Methodists promoted literacy and education for all believers, including slaves.  They believed literacy was central to gaining a better understanding of God through the Bible.  Methodists and Baptists also encourage emotional expression of faith.

Today, the Gullah descendants continue to lead a spiritual life that influences every aspect of their lives.  They believe in the dual nature of the soul and spirit.  In death, one’s soul returns to God but the spirit remains on earth to live among the individual’s descendants.  It is common for funerals to be ornate and for mourners to decorate graves using items that belonged to the newly deceased.  The Gullah people believe the spirit of their ancestors participates in their daily affairs and protects and guides them using spiritual forces. 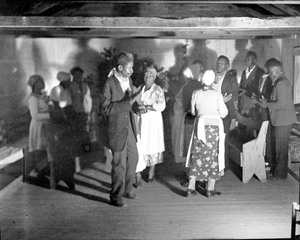 Other traditions practiced by Christian Gullahs include Praise Houses (Pray’s Houses) and Shouting or Ring Shouts. Praise houses are small wooden buildings located away from the community where worshipers could freely express their faith and emotions.  They were used to strengthen one’s faith, examine new members, and provide spiritual guidance for the community.  Shouting or Ring Shouts are an integral part of the Praise House.  In a Ring Shout, men and women form a circle and sing, clap their hands, and shuffle or stomp their feet in a fast paced, rhythmic beat.  They often move in a counterclockwise direction.  These Ring Shouts are thought to be the remnants of African ceremonial dances that were a part of African religious traditions.  The word “shout” is thought to be derived from “saut,” a West African word of Arabic origin that describes an Islamic religious movement performed to exhaustion.

Islam’s legacy continues in the Gullah community.  It began in early colonial North America where the lowcountry hosted the largest community of African Muslims.  These Muslims were primarily in the Sea Islands of Sapelo, Saint Simon’s and Saint Helena.  Today the presence of Muslim slaves is often discovered through names and descriptions given in runaway slave ads. Charleston’s Royal Gazette, South-Carolina Gazette and Country Journal, Charleston Courier and Savannah’s Georgia Gazette give accounts of identification for runaway slaves.  Names appeared like Samba or Sambo meaning “second son” in the language of Fulbe and Hausa.  Often times they were described as being a “yellow fellow” or “yellowish,” in keeping with the complexion of those from the Fullah country.

A plantation in Frogmore at St. Helena Island, South Carolina lists a register of slaves, some of whom possibly held Muslim identity.  The register lists slaves like “Sambo, eighty-five-years old and African-born; Dido, a fifty-six-year old [Moroccan]” and two children of separate families named Fatima and Hammett (Hamid or Ahmad).  According to information given in the register, Sambo and Dido were probably Muslim and at least one parent or both parents of Fatima and Hammett were probably Muslim.

Despite the presence of Christianity and other African religions in the lowcountry, Sapelo and Saint Simon’s Islands contained a large population of devout Muslims. These areas are considered the most significant pockets of Islam in antebellum North America.   In the history of those areas, two figures emerge as the best examples of a devout African Muslims, Salih Bilali and Bilali.

Salih Bilali was born around 1765 in Maasina, a place along the upper Niger valley.  Captured and sold into slavery around 1790, Salih Bilali was sold to several different owners until he reached Cannon’s Point Plantation on Saint Simon’s Island.  By 1816, he was fifty-one years old and the head driver on the plantation. He fulfilled that position due to his remarkable managerial skills.  In fact, he was such a dependable driver that his owner often left the plantation for several months, leaving Silah Bilali in charge without any other supervision.  He died in the late 1850s.

Bilali (pronounced Blali in Sapelo community) had other names such as Ben Ali or the Old Man.  His great-granddaughter, Katie Brown, referred to him as Belali Mahomet. Bilali was born in Guinea and worked on the large plantation of Thomas Spalding (1774-1851) on Sapelo Island.  Like Silah Bilali, he too was promoted to head driver and managed four or five hundred slaves.  His is most notable for his collection of an Islamic Maliki text known as “Risala of Ibn Abi Zayd.”

Katie Brown, who was considered “one of the oldest inhabitants” on Sapelo Island at the time of her interview by the Works Progress Administration in the 1930s, recalls the large family of Bilali. There were seven daughters: “Margret, Bentoo, Chaalut, Medina, Yaruba, Fatima, and Hestuah.”  Katie was the granddaughter of Margret.  She explains the detailed lives of Bilali and his wife Phoebe through the oral history of her mother and grandmother Margret.  Bilali and Phoebe would “pray on duh bead” and “wuz bery puhticuluh bout duh time dey pray and dey bery regluh bout duh hour…Belali he pull bead an he say, “Belambi, Hakabara, Mahamadu” and Phoebe she say, “Ameen, Ameen.” These practices are all indicative of the strict prayer practices of Muslims.

In the late eighteenth and nineteenth century, Islam became less dominant as the non-Muslim population exceeded Muslims.  Muslims were forced to marry those outside their religion.  Also, under the horrible conditions of slavery, families were often torn apart as they were sold off to different slave owners.  To effectively maintain the teachings of Islam, it had to be passed down through generations.  As Africanized Christianity slowly became a force, Islam suffered.  If Muslim children were sold away from their families they were often adopted into non-Muslim communities and soon ceased to practice that religion.

While many people in the lowcountry turned to religion to alleviate their oppression, other people used conjuring to protect against the evils of slavery.  Conjuring in the lowcountry is a practice from West and West Central Africa. The Gullah community perceived this “magic art” to be very powerful.  Yet there are subtle differences in how the Gullahs/Geechees practiced conjuring and how West Africans practiced it.  There the community had men called fetish priests.  The priests were sacred figures in the community because they had the ability to create powerful fetishes to protect the people of the community. These fetishes were made of wood, horn of goat, hoof of antelope, piece of metal or ivory, hair of someone’s head and fingernail clippings.  They were placed along the coastal line as “outsiders” entered the region.  Also, they were placed along paths, at the gate of every village, door of every house, crossing place of streams and around the neck of everyone.  Before the fetishes were positioned in their respective places, they received supernatural powers from the hands of the fetish priests.

In America, the conjurer did not openly practice his art like the fetish priests of West Africa.  The institution of slavery prevented this socially, politically, and culturally.  Conjurers were perceived as a threat to white society as many enslaved persons went to them to receive potions or charms in protection or revenge against their masters.  Charles Colcock Jones gives an account of conjuring in the Liberty County, Georgia.  He was a Presbyterian minister and wealthy Liberty County planter who sought to convert many people from the power of the conjurer to Christianity.  He thought conjurers were deceptive witches and sorcerers only after money and riches. Jones also saw charms throughout Liberty County.  They were composed of animal or human hair, wool, crooked sticks, glass bottles, rusty nails, roots, etc. They were prepared in size or quality with various incantations, suitable to persons and circumstances.  Charms were placed in a small bag worn around the neck or buried under a door and planted along paths to keep evil forces away.  Sometimes charms were made of secret roots with supposed medicinal powers.

Jones’ conclusion was to defeat conjurer’s power by “gradual increase of knowledge.”  However, it was difficult to identify a conjurer because he led a secret life and conjuring continued to be a powerful force in the lowcountry.

Today, the Gullah community continues to practice a religion that reflects the diversity of the religions that influenced its creation.