Revolutionary fervor was slow to take hold in colonial Georgia, largely due to the effective leadership of Royal Governor Sir James Wright. However, in July 1775, a Provincial Congress was established to govern in opposition to Royal Authority. Browse the page below to read more about Georgia during the American Revolution. 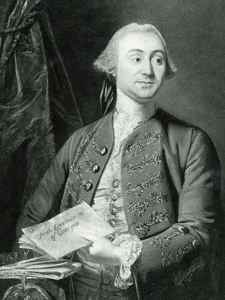 Sir James Wright (1716-1785), an attorney and plantation owner, was appointed Royal Governor of Georgia in April 1761 after the resignation of Governor Henry Ellis. Wright was the third and last British Royal Governor of the Colony of Georgia. Wright was a very successful governor, encouraging the colony’s growth by attracting new settlers, successfully negotiating with the Native Americans and overseeing the expansion of Georgia’s territory. Wright himself became one of the largest landowners in the state with eleven plantations and 523 slaves.

As revolutionary fervor spread through the colonies in the early 1770s, Wright’s popularity, along with his administrative ability, effectively delayed rebellious activity in Georgia. Yet he could not stop the growing dissatisfaction with colonial rule. In January 1776, a group of patriots led by Joseph Habersham issued an arrest warrant for Governor Wright and briefly took him prisoner. Within a month, Wright broke his parole and fled Savannah for London on the British Navy man-of-war, the HMS Scarborough. When the British captured Savannah in December 1778 Wright was reinstated as Royal Governor. The British continued to hold the city until after the battle of Yorktown in October 1781. Wright and the royal government evacuated Savannah on July 11, 1782 and returned to England. Sir James Wright died in London on November 20, 1785 and is buried at Westminster Abbey. 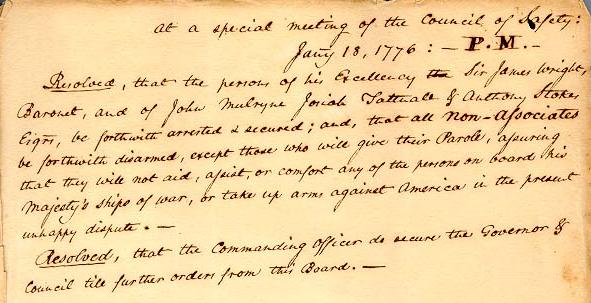 Revolutionary fervor was slower to take hold in Georgia than other American colonies. Yet when news reached Savannah that British troops fired on American Minute Men in Massachusetts, acts of rebellion became much more prominent in the colony. Such acts included a raid by Savannah’s Liberty Boys, a local group of patriots, on the public powder magazine. In July 1775, a Provincial Congress was established to act as a separate government in Georgia in opposition to Royal authority. The Congress also established a sixteen-member Council of Safety. 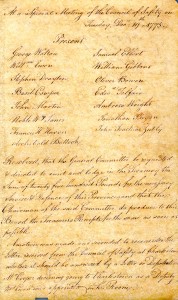 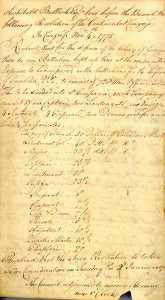 Abigail Minis (c.1701-1794) was one of the earliest settlers of the Georgia colony. She landed in the new colony with her husband and children in July 1733. Her husband, Abraham Minis, became a successful merchant and land owner in Savannah. After his death in 1757, Abigail took over the management of the family’s mercantile firm and tavern and oversaw more than 1,000 acres of land in and around the city of Savannah.

Throughout the American Revolution the Minis family supported the Patriots. During the Siege of Savannah, in October 1779, Abigail provided provisions to the American and French forces trying to capture the city from the British. After the failed attempt to unseat the British from Savannah, Minis and her family temporarily moved to South Carolina. While in Charleston, South Carolina, Abigail wrote the above letter on January 14, 1780 to her friend and fellow Savannahian Mordecai Sheftall, who was currently in Philadelphia. Abigail was requesting he help her gain reimbursement for the assistance she provided the Continental Army during the Siege of Savannah. Abigail Minis eventually returned to Savannah where she died on October 11, 1794 at the age of ninety-three. 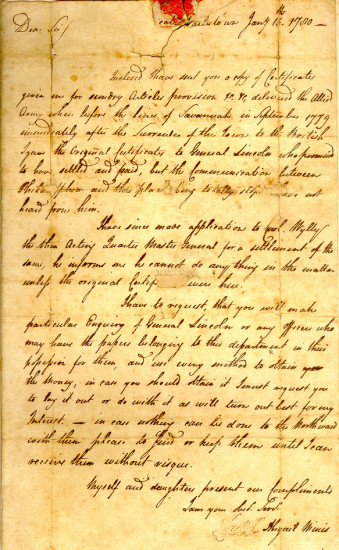 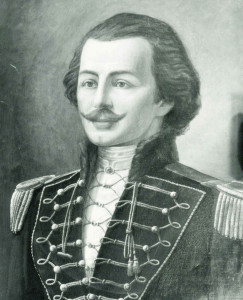 Count Casimir Pulaski (1745-1779) was born in Warka, Poland near Warsaw. After fighting for Polish independence from the Russian Empire, Pulaski became inspired by the ideals of the American patriots fighting for independence from Great Britain. He came to America and joined the revolutionary effort in 1777. His first fighting along the frontlines took place at the Battle of Brandywine. Before long he was commissioned a Brigadier-General and placed in command of the American cavalry. 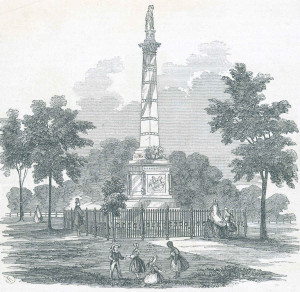 In the battle for Savannah in October 1779, also known as the Siege of Savannah, Pulaski was given charge of the armies of both the American and French forces under General Benjamin Lincoln and Count d’Estaing, respectively. The British had controlled Savannah for almost a year, and the combined French and American forces made a valiant attempt to gain control of the city. The battle took place on Spring Hill Redoubt, southwest of the town. While leading a cavalry charge, Pulaski was wounded by a grapeshot, or bullet, that pierced the upper part of his thigh. He was taken at once to the USS Wasp where he later died on October 11, 1779 of gangrene without regaining consciousness. He was buried at sea. Pulaski was the only high-ranking officer of foreign birth to lose his life for the American cause during the American Revolutionary War. A monument was erected in his honor in Monterey Square in Savannah during the 19th century.

The Pulaski Grapeshot is mounted on an engraved silver candlestick and inscribed, “Grapeshot which mortally wounded Count Casimir Pulaski, Oct. 9, 1779, extracted from his body by Dr. James Lynah, ancestor of present owner, James Lynah, Esq.” The Lynah family kindly donated this artifact to the Georgia Historical Society, where it is on display to the public.

Continue to Georgia in the Early Republic