The original Georgia Trustees was a governing body chartered and appointed by His Majesty King George II of England in 1732 to establish a new colony in North America. The Trustees governed the colony of Georgia for twenty years. Browse the page below to learn about Trustee Georgia (1732-1752).

In 1740, Benjamin Martyn (1699-1763) authored “An Impartial Enquiry into the State and Utility of the Province of Georgia.” Martyn discussed the viability of the colony, describing both its strengths and weaknesses, while acting as Secretary to the Trustees. Many critiqued of the usefulness and viability of the Georgia colony. In this document, Martyn lists these criticisms and explains, one by one, why they are invalid. Promotional literature about European colonies was not uncommon at the time – whether the information contained in that literature was true or not is another matter. Europeans interested in improving their lives and fortunes by emigrating from Europe to a colony in the New World were understandably apprehensive about the possibilities of untamed land, unfamiliar climates, and unfriendly natives. In the case of the Georgia colony, questions of the quality of the soil and the ability of colonists to prosper without a dependence on slavery, which was banned in the colony until 1749, were foremost on many people’s minds. 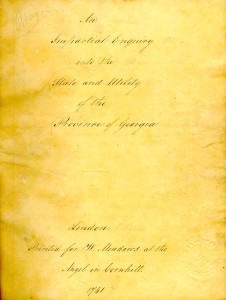 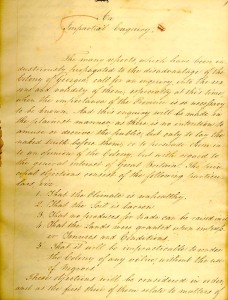 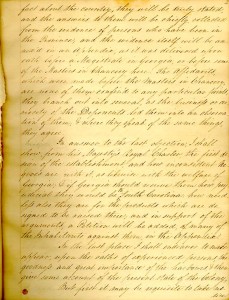 “An Impartial Enquiry into the state and Utility of the Province of Georgia” by Benjamin Martyn London, Printed for W. Meadows, 1741. From the Georgia Historical Society Rare Collection.

-Cover-
An Impartial Enquiry into the State and Utility of the Province of Georgia London: Printed for W. Meadows at the Angel in Cornhill 1741

-Page 1-
An Impartial Enquiry The many reports, which have been industriously propagated to the disadvantage of the Colony of Georgia, call for an enquiry into the reasons and validity of them; especially a this time, when the importance of the Province is so necessary to be known. And this enquiry will be made in the plainest manner, as there is no intention to amuse or deceive the public, but only to lay the naked truth before them; or to persuade them into an opinion of the Colony, but with regard to the general interest of Great Britain. The principal objections consist of the following particulars, vis.

1. That the Climate is unhealthy.
2. That the Soil is barren.
3. That no produces for trade can be raised in it.
4. That the Lands were granted upon improper Terms and Conditions.
5. That it will be impracticable to render the Colony of any value, without the use of Negroes.

These objections will be considered in order; and as the first three of them relate to matters of

-Page 2-
fact about the country, they will be truly stated, and the answers to them will be chiefly collected from the evidence of persons who have been in the Province; and the evidence itself will be annexed in an Appendix, as it was delivered upon oath before a Magistrate in Georgia, or before some of the Masters in Chancery here. The affidavits, which were made before the Masters in Chancery, are none of them confin’d to any particular points; they branch out into several, as the business or curiosity of the Deponents led them into an observation of them; & where they speak of the same things n they agree. In answer to the last objection, I shall show, from his Majesty’s Royal Charter, the first design of the establishment, and how inconsistent Negroes are with it, as likewise with the welfare of Georgia; & if Georgia should receive them how prejudicial they would be to South Carolina, how needless also they are for the products which are designed to be raised there; and in support of the arguments, a Petition will be added, of many of the inhabitants against them, in the Appendix. In the last place I shall endeavor to make appear, upon the oaths of experienced persons, the goodness and great importance of the harbours, & then give some account of the present state of the Colony... 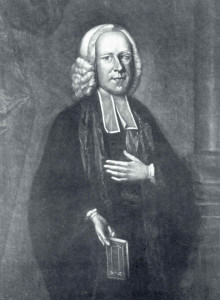 Reverend George Whitefield (1714-1770), a minister of the Church of England and one of the leaders of the Methodist movement, founded the Bethesda Orphan’s Home in 1740 with the help of James Habersham. Now known as Bethesda Academy, it is the nation’s oldest working orphanage.

Whitefield’s efforts and success at Bethesda led to national recognition and attention during the 1740s. Due to his extensive travels in the American colonies, he was one of the most widely recognized public figures before George Washington. Benjamin Franklin was a supporter of the orphanage for a time, until he became persuaded that Savannah was not the best location for such a charitable institution. However, Franklin was unsuccessful in convincing his friend Whitefield that the orphanage would be better off if it were located in Pennsylvania. 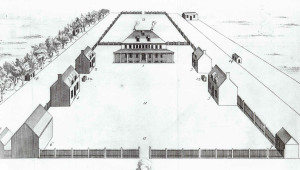 In 1748, Savannah minister Samuel Fayrweather wrote to Reverends Thomas Prince and Thomas Foxcraft providing a detailed account of the orphanage at Bethesda.

Fayrweather includes important historical information about Bethesda and describes the positioning and architecture of the home, the surrounding grounds and orchards, and the service, work, prayer and education of the students. 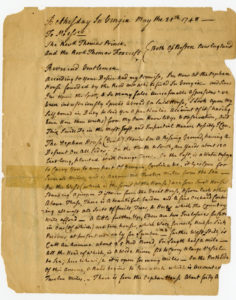 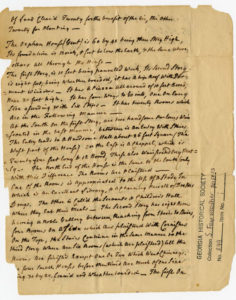 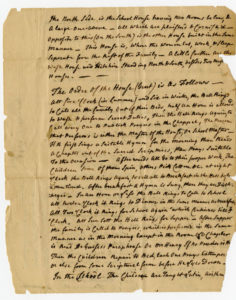 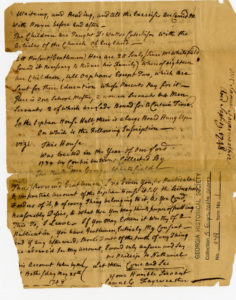 Maps serve an important purpose in historical studies. Maps can be used for many different reasons. They represent what was known and unknown about a particular area. Countries used maps to explore unknown places and establish their claim in the new territories. The above 1757 map of the southeastern coast of the British colonies in North America reveals many place names that are familiar to residents of these areas today. It provides geographic details, including rivers, mountains, and islands, as well as latitude and longitude markers. The below map, drawn by Samuel Urlsperger ten years earlier, shows settlements, forts, and trade paths in the colonies of Georgia and South Carolina. 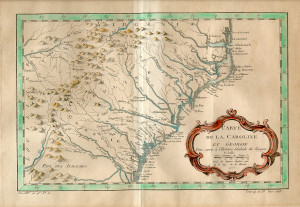 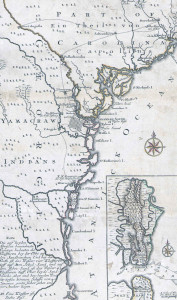 Continue to Georgia and the American Revolution