The election of Abraham Lincoln to the presidency in 1860 renewed hostility between northern free states and southern slave states. When South Carolina seceded from the United States in late 1860, Georgia soon followed and joined the Confederate States of America. On the morning of April 12, 1861, the first shot was fired from a Confederate battery and the Civil War began. The war lasted four bloody and devastating years before General Robert E. Lee and the Confederate army surrendered in 1865. The period of rebuilding as a nation after, known as Reconstruction, lasted for several more years. Browse the page below to read about Georgia’s role before, during, and after the Civil War. 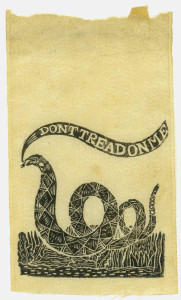 Secession Ribbon. From the Georgia Historical Society Object collection, A-1361-517.

The presidential election of 1860 renewed hostilities between northern free states and southern slave states when Abraham Lincoln won the election without carrying any southern states. On December 20, 1860, a convention of South Carolina delegates met in Charleston and passed an “Ordinance of Secession.” Within six weeks, Mississippi, Florida, Alabama, Georgia, Louisiana and Texas followed. On February 4, 1861, these seven states held a convention in Montgomery, Alabama, to organize a new government for the Confederate States of America. At the convention, the delegates adopted a constitution and elected Jefferson Davis president.

Virginia, North Carolina, and Tennessee also withdrew from the United State, and the Confederate capital was moved to Richmond, Virginia. The seceded states argued that all states had entered the Union of their own free will and could secede if they felt the Constitution, as an agreement between the states, was not being respected.

Ribbon of the Confederate flag used on the funeral wreath of Lawrence Cecil Berrien, 1902. From the Georgia Historical Society Objects Collection, A-0067-005.

Four years of a long and bitter struggle followed. In the face of overwhelming forces, Confederate General Robert E. Lee surrendered to United States General Grant at the Appomattox Courthouse on April 9, 1865. Within a few weeks, General Johnston surrendered his Confederate army to General Sherman and the war was over. With the end of the war came the end of the secession movement and the Confederate States of America. Unifying the states as one nation would take longer.

Lafayette McLaws (1821-1897), a native of Augusta, Georgia, graduated from the United States Military Academy at West Point in 1842. He served in the U. S. Army on the Texas frontier and distinguished himself during the Mexican War (1846). When Georgia seceded from the Union, he resigned his commission from the United States Army and joined the Confederate States of America Army as a Major. He served with distinction throughout the Civil War, rising to the rank of Major General. After the War, he returned to Georgia. In 1875, he was appointed collector of internal revenue for the First District of Savannah and served as postmaster at Savannah from 1876 till 1884 (he was appointed to both of these posts by President Ulysses S. Grant). 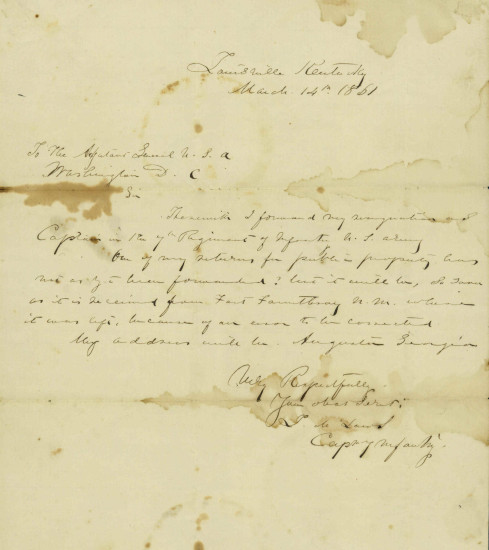 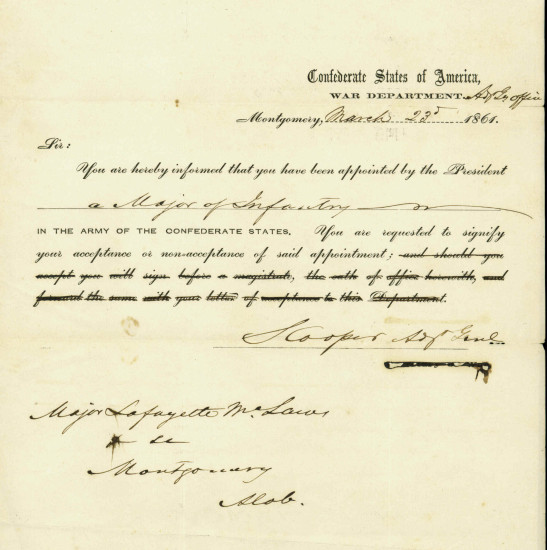 The war touched every person in the United States, those in government, those in the military, and those left behind at home. Robert Hamilton Harris (1842-1929), of Thomasville, Georgia, served in Company A, 29th Regiment of the Georgia Infantry. On October 13, 1863, Harris married Martha “Mattie” Love (1845-1900). Several of Harris’ letters to Mattie, before and after they were married, have been preserved. In them, Harris discusses life as a soldier and reflects on the separation of loved ones during this period. 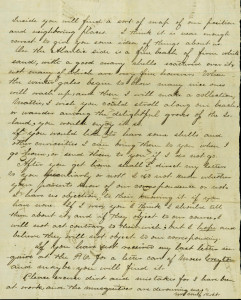 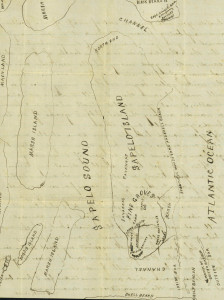 Following the close of the Civil War, the nation began the process of rebuilding itself back into one nation. Under President Andrew Johnson, reconstruction, or the restoration of the seceded states to the United States. In May of 1865, Johnson issued a proclamation of pardon to nearly all those engaged in the war. The 13th Amendment to the United States Constitution was ratified prohibiting slavery in the United States. State’s held conventions to repeal any “Ordinance of Secession,” the 13th Amendment was adopted, and war debt declared null and void.

William Jones was a planter in Columbia County, Georgia. Following the Civil War, Jones was pardoned by President Andrew Johnson on August 25, 1865. On December 5, 1865, Jones took an amnesty oath pledging to support and abide the Constitution of the United States. 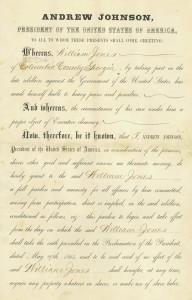 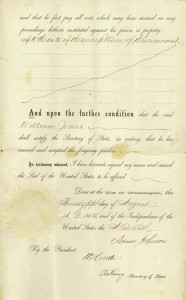 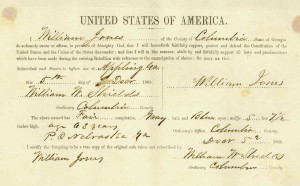 The United States Congress thought the President was being too lenient with the former Confederate states. Some leaders considered the former Confederate states as conquered territory and wanted to deny southern representatives their seats. Congress made several new laws to protect the freed slaves, including the 14th Amendment which guaranteed all African Americans full citizenship. They required each state to adopt the 14th Amendment before being readmitted to the Union. In 1867, the ten states still out of the Union were placed under military rule and organized into five military districts. Each district was under the command of a military governor. Within one and a half years, seven of the states agreed to Congress’ demands, adopted the 14th Amendment, and had its representatives readmitted into Congress.

In 1869, Congress proposed the 15th Amendment guaranteeing the right to vote to all men. The amendment went into effect in 1870 after all ratification in all states. Georgia was the final state readmitted into the Union in January 1871. After four years of war and six years of dissension, the United States map was restored to its pre-1861 form. 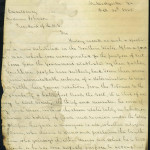 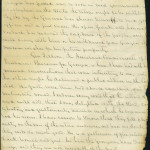 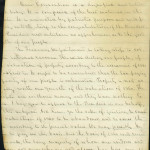 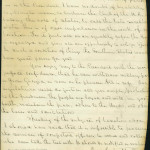 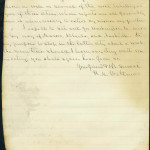 Continue to Struggles of the Late Nineteenth Century