The first half of the 19th century brought a lot of growth and change to the state of Georgia.  From steamships, to slavery, to Cherokee removal, explore the page below to read about Georgia in the years leading up to the Civil War. 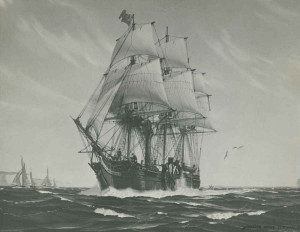 Painting of the Steamship SS Savannah. From the Georgia Historical Society Collection of Photographs, 1361PH

The S. S. Savannah was the first steamship to cross the Atlantic Ocean, marking a significant milestone in technology and travel.

Originally built as a sailing ship, the Savannah was launched in New York’s East River on August 22, 1818. The ship was then purchased by the Savannah Steamship Company, owned by Savannah businessmen like William Scarborough, and fitted with steam engines and side wheels. The 380-ton ship’s wheels were made of wrought iron and were designed to detach from the axles, fold up like fans, and rest on the decks while the sails were in use. Originally, pitch pine was used as fuel and the ship could travel up to a speed of ten knots.

After being brought down the coast to Georgia, the S. S. Savannah departed from Savannah, Georgia, under the command of Captain Moses Rogers on May 22, 1819, bound for Liverpool, England. The engines were used about two-thirds of the time, the sails used the rest of the time to conserve fuel. She arrived in Liverpool on June 20, 1819, after about four weeks. In Liverpool, hundreds of visitors came on board to examine the machinery and marvel at the ship. After stopping in Sweden, Norway, Denmark, and Russia, the steamship returned to Savannah on November 30, 1819. 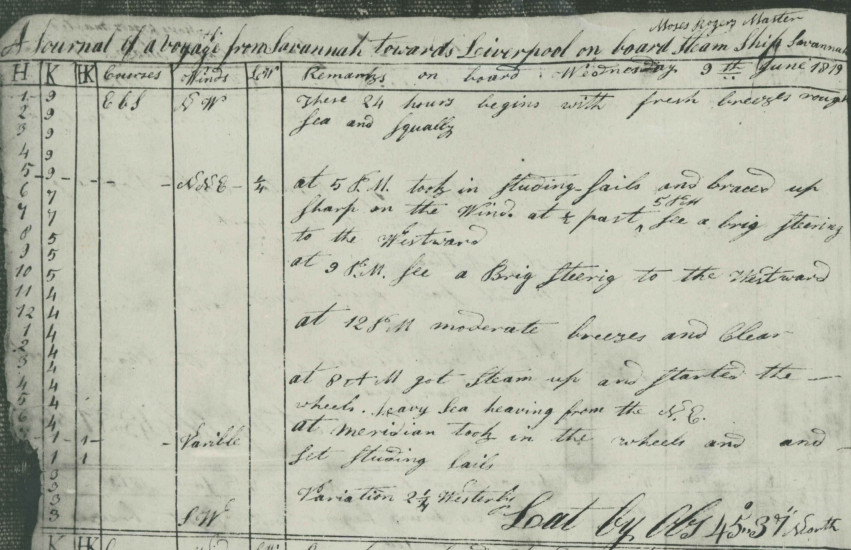 Gold was first found in north Georgia in 1828 in Habersham County. A gold fever broke out and many prospectors moved into the region, lands of the Cherokees, and began mining for gold. A United States branch mint for coining gold was established in Dahlonega, Georgia, the center of the gold region. Dahlonega, located in Lumpkin County, was previously a small Native American village named Tauloneca, meaning “yellow money.” For a number of years, gold mining in the northern portion of Georgia was profitable, until the more valuable gold mines of California were discovered. 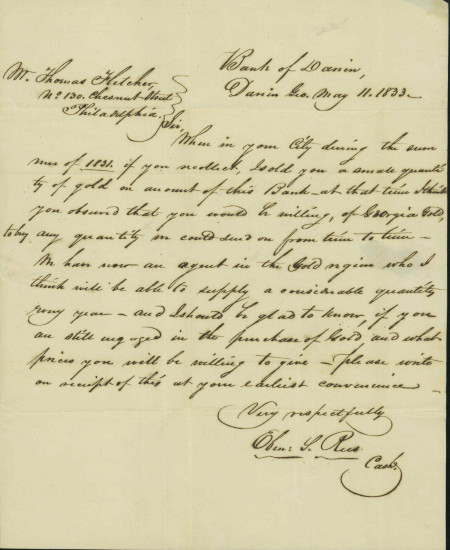 In 1833, Ebenezer S. Rees (1790-1842), a long-time cashier of the Bank of Darien, wrote Thomas Fletcher to say that the Bank of Darien had an agent in the gold region who could supply a considerable quantity of gold each year and requested that Fletcher inform him of the price he would be willing to pay. 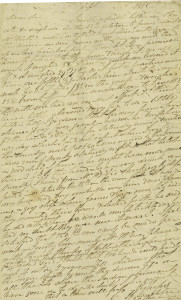 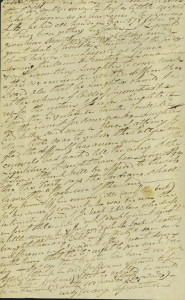 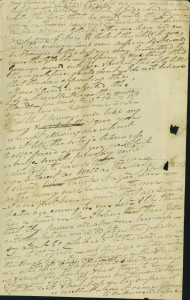 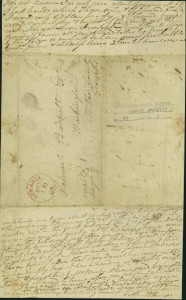 Samuel Barnett of Wilkes County, Georgia, drew two lots in the Gold and Land lotteries of 1832 and 1833. In 1836, N. B. Lee wrote Barnett from Auraria, Lumpkin County, Georgia, describing gold mining in Auraria and several of the individuals who had drawn lots and were working the mines, including Henry Laughter, Albert J. Semmes, and Judge Garnett Andrews. Auraria, within the lands of the Cherokee Nation, was settled in 1832 by miners; the name means “gold mine.” Lee talked about the Cherokees and the mines and mentioned General John E. Wool who was in charge of removing the Cherokees from the region. 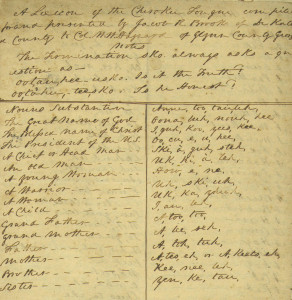 Following the Creek Wars of 1812-1814, the United States and the State of Georgia began pressuring the entire Cherokee Nation to move to Arkansas where a tract had been set aside for them freeing up land in Georgia for white settlement. However, the majority of the Native American group refused to leave their lands. Cherokee leaders maintained that they were the original inhabitants of America, an independent nation not bound by U. S. law and protected by treaties made with the Federal government.

The issue came to a head with the election of Andrew Jackson as president and the discovery of gold in the Dahlonega gold fields within the Cherokee lands in 1829. Jackson was an open advocate of removal of the Cherokees, regardless of previous treaties, calling the Native American tribes east of the Mississippi “a conquered and dependent people.” Congress passed the Indian Removal Bill in May 1830. The Cherokees appealed to the United States Supreme Court without satisfaction, the Court ruling that they were “domestic dependent nations” with no legal right to bring suit against Georgia laws. The result was widespread plunder and seizure of Cherokee villages, farms, and lands.

Eventual removal by the United States Army of the main body of the Cherokee Nation to a western reserve was achieved through a series of forced expulsions and migrations over a period of several years. Several thousand Cherokees lost their lives along the “Trail of Tears,” as the removal became known, as they were given no choice but to migrate west. Georgia took possession of the lands ceded by a treaty in 1835.

Jacob R. Brooks, a Major in the United States Army, became an Indian agent for Cobb County in 1833. He prepared an inventory of the Cherokee language, including nouns, numerals and several miscellaneous questions or terms, for Colonel W. W. Hassard of Glynn County.

In May and June of 1838, James Hemphill and Joseph Watters sold Cherokee property in Hightower River [Etowah], Floyd County. A notebook was kept listing the Cherokee owner, description of the property and amount it was sold for (see sample pages from notebook). 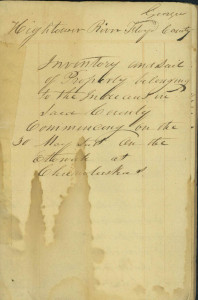 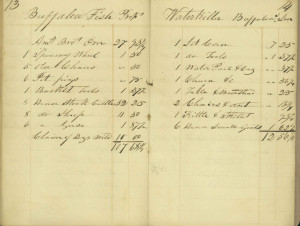 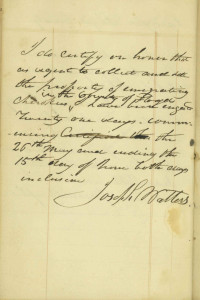 In 1834, a survey was made between Savannah and Macon for the purpose of establishing a rail route between the two Georgia cities. In 1836, the Central Railroad was granted a charter and the building of the railroad, starting at Savannah, began at once. It took several years to build, and in 1843, the first passenger car arrived at the temporary depot set up outside of Macon. The original road was 190 miles long and, at the time it was completed, was the longest railroad in the world built and owned by one company.

By 1840, there were a total of 636 miles of railroad graded in the State of Georgia, more than in any other state in the Union at that time. In addition to the Central Railroad, the Georgia Railroad (chartered in 1833) left out of Augusta, and the Western & Atlantic Railroad set out from Georgia towards the Tennessee River through Cherokee county. The Western & Atlantic, built by the State of Georgia, was started at a spot off of the Chattahoochee River where the Central and Georgia railroads would end.

By 1845, the Georgia Railroad was completed to the Western & Atlantic at a point originally called Terminus. The town that grew up around the meeting point was then called Marthasville in honor of Governor Wilson Lumpkin’s daughter. However, it was soon renamed Atlanta and became the center of the railroad system for the whole state. 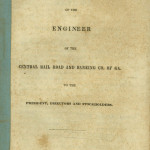 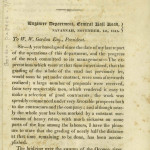 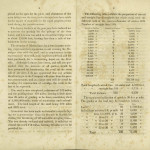 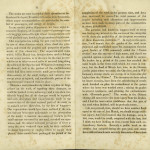 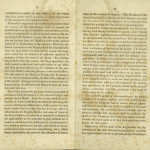 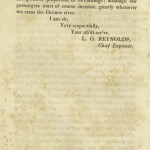 Seventh Report of the Engineer of the Central Railroad and Banking Company of Georgia, 1841 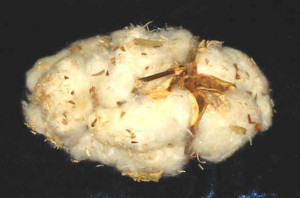 Cotton Ball, picked in 1915. From the Georgia Historical Society Object Collection, A-1361-470

Prior to the American Revolutionary War, cotton was not a viable crop in Georgia. In 1786, sea island (also known as long-staple) cotton was introduced and successfully cultivated along the coast of Georgia. Inland, the upland or short-staple cotton was grown. However, until the invention of the cotton gin, upland cotton was very labor intensive, being hard to separate from the seed. The cotton gin allowed planters to clean one hundred pounds of cotton a day as compared to only five or six pounds per day by hand. Eli Whitney’s invention made the raising of cotton profitable and cotton soon became the chief source of wealth in the southern Cotton States (including Georgia, South Carolina, and Alabama).

During the early 1800s, a cotton district developed around Columbia, South Carolina and Augusta, Georgia. The cotton was grown on inland plantations and then transported by river to Charleston and Savannah where commission agents (factors), bankers, merchants and shipping services provided planters with connections to the markets in the northeast and England. Following 1815, there was an enormous cotton boom. Cotton continued to be an important crop and defining force in life for Georgia and the South well into the 20th century. At one time, Georgia raised more cotton than any other part of the world, and in 1936, farmers in Georgia sold $67 million dollars worth of cotton.

Thomas Spalding (1774-1851) was a planter, architect, builder and politician who lived on Sapelo Island along Georgia’s coast. He was the largest producer of sea island cotton in Georgia and introduced the crop of sugar cane to the state. Spalding wrote a number of articles on agricultural subjects, including “On the Cotton Gin, And Introduction of Cotton.” The article, describing the history of cotton cultivation, was published in the Southern Agriculturalist in the March 1844 issue. Spalding’s production of cotton spanned the first half of the 19th century. 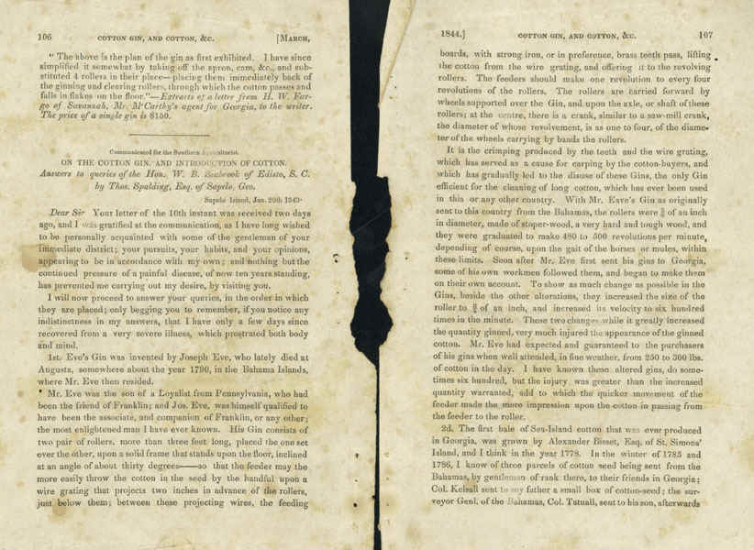 “On the Cotton Gin, And Introduction of Cotton,” by Thomas Spalding, 20 January 1843, published in the Southern Agriculturist (March 1844). From the Spalding Family Papers, MS 750.

The exportation of cotton through Charleston and Savannah reached its peak during the 1880s and 1890s. In 1886, Henry T. Williams was advertising long staple cotton seed in Charleston. 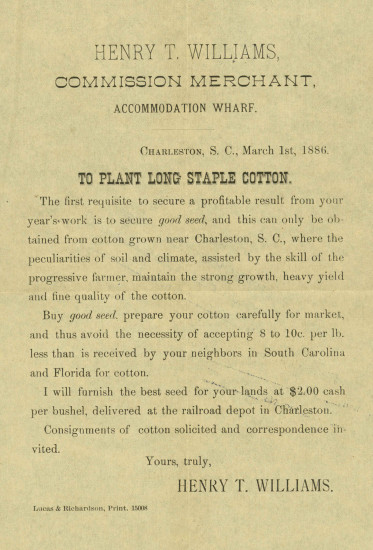 The institution of slavery first began in the American colonies in 1619 when a Dutch war vessel arrived in Jamestown, Virginia, and sold twenty African slaves to colonists. Soon slavery spread throughout all the colonies. The greatest number of slaves was concentrated in Virginia and the southern colonies where agricultural work required great amounts of physical labor. The southern colonies soon grew dependent on a slave system and slavery became the basis of social order. The invention of the cotton gin and the growing importance of the cotton crop directly led to the increased importance of slave labor to work the vast fields of cotton. Slavery was not only very profitable for southern planters, but also for northern manufacturers producing cotton cloth. 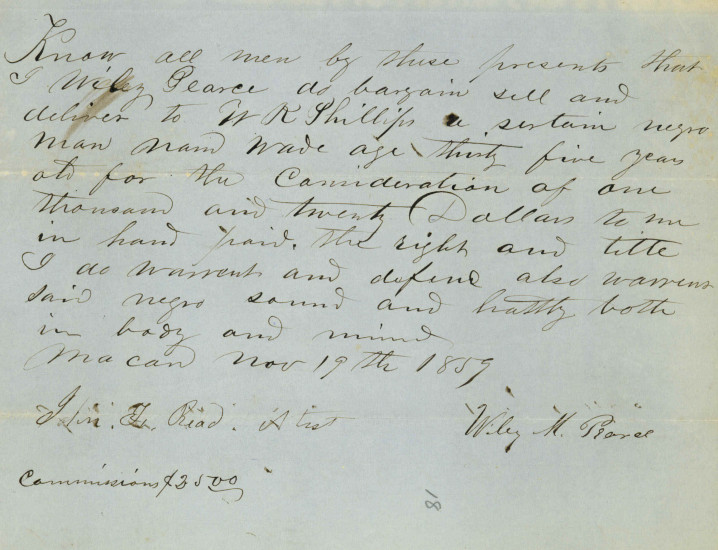 Slaves were considered property and were bought, sold and traded like any other commodity. The sale and auction of slaves was commonplace in most southern cities. For instance, Wiley M. Pearce sold a male slave, named Wade, to W. R. Phillips for $1,000 in 1859 in Macon, Georgia. Owners, or masters, controlled the movements of their slaves. Those traveling without permission could be considered runaways or fugitives and brought back by force. Slaves were forbidden to learn to read or write.

From the 1840s on, there was a national discussion on slavery, not only if it was right and humane, but how it related to the western territories. By this time, slavery was largely confined to the southern states dependent on cotton, tobacco and sugar. Many northerners did not want slavery to spread beyond states in which it already existed. Abolition societies were formed throughout the North whose efforts were aimed at bringing about the emancipation (freeing) of the slaves. The Compromise of 1850 settled the question of whether California would be a slave state or a free state. After much debate, the compromise admitted California as a free state, slave trade was abolished in the District of Columbia, more stringent laws regarding the return of fugitive slaves were enacted and the question of slavery in the rest of the new territory would be left for the inhabitants to settle.

The slavery debate played an important part in the Civil War as an example of states’ rights. During the Civil War, President Lincoln issued a proclamation (Emancipation Proclamation) declaring that from January 1, 1863, on, all persons held in slavery in the states in rebellion against the United States (with exceptions in Tennessee and parts of Louisiana and Virginia) should be free. The proclamation had little effect upon most of the slaves in southern states while the war was still going on. Many knew their freedom or enslavement depended on the success or failure of the Confederate Army. The outcome of the war finally settled the question of slavery, “over all our land no man held in bondage to another.”

Continue to Civil War and Reconstruction