The struggles continued in Georgia during the last half of the 19th century, following the Civil War. Savannah had three major Yellow Fever epidemics in the 19th Century, and a destructive and deadly hurricane ripped through the coast in 1893. The Spanish-American War saw over 3,000 Georgians volunteer for service and training camps were established across the state. Browse the page below to learn more about Georgia during the late 19th century.

On August 11, 1876, a fatal case of yellow fever developed near Savannah’s eastern docks. Within two weeks, 1,066 Savannahians had died in the epidemic that followed. By September 1876, 5,000 of the 28,000 residents had fled Savannah. Yellow fever was a scary and mysterious disease bringing on a sudden and painful death. Early symptoms included chills, followed by a fever, back pains, and jaundice (yellow-green tint to the skin) which gave the disease its name. After uncontrollable hemorrhaging from the mouth, nose and stomach, death often soon followed. About sixty percent of those infected died and the disease usually ran its course in about six or seven days.

Savannah’s first major yellow fever epidemic occurred in 1820 when 666 people died. In the 1854 epidemic, 1,040 people died. Locals who could afford to leave fled the city and businesses shut down. The 1876 epidemic was a turning point in Savannah’s medical history and the public’s responsibility for sanitary conditions. Many of Savannah’s doctors blamed local climate and sanitary conditions, while another group believed the disease was brought into the port from ships and sailors. Following a yellow fever outbreak in the Mississippi Valley which killed 20,000 in 1878, the Federal government became more involved in public health reform. We now know that yellow fever is caused by a virus carried by a female mosquito species native to Africa but common in Southern cities. Epidemics always ended in the autumn when frosts killed the mosquitoes. Both groups of physicians ended up to be right: each epidemic began as an import from a tropical climate; and local conditions, including standing water, contributed to the breeding of mosquitoes and spread of the disease.

During the 1876 Yellow Fever epidemic, the Lawton family of Savannah escaped to Gainesville, Georgia, to wait out the disease. While there, Alexander Robert Lawton wrote Charles P. Greenough on September 11, 1876, discussing the fever. 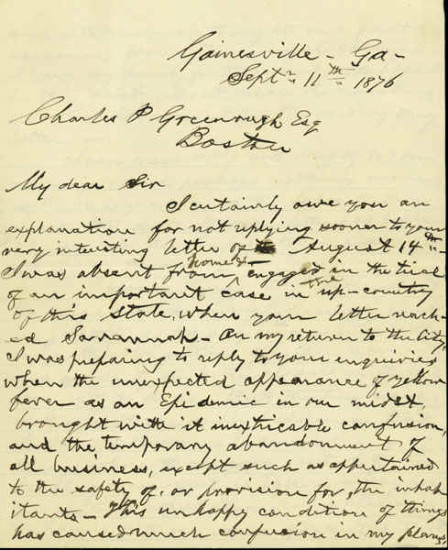 A hurricane with the same destructive force as Katrina hit the Georgia coast on August 27, 1893. Known as the “Sea Island Storm,” it killed nearly 2,000 people.

The hurricane first hit the coast, passing over Georgia’s Sea Islands, before churning its way north 100 miles with a 16–foot storm surge. The hurricane made landfall just south of Savannah, with winds of 120 mph, a category 3 storm. With an unusually low barometric pressure, it was one of the most powerful storms to ever hit the east coast.

The impact was devastating; nearly 2,000 killed, 30,000 homeless, and property damage in the millions. “Savannah,” reported one paper, “is demolished.” Governor William Northen called on Clara Barton and the Red Cross for relief, but help didn’t arrive till October. The Sea Island Storm remains the third deadliest in American history.

On February 15, 1898, the United States’ warship Maine was blown up during a peaceable mission in Havana, Cuba. Nearly 300 crew members were killed. At the time, Spain was in control of Cuba. The United States declared war against Spain and President William McKinley called for volunteers to go to Cuba. Over 3,000 Georgians volunteered and training camps were set up at several locations in Georgia, including Athens, Augusta, Columbus, Griffin and Macon.

Commodore Dewey, commander of the American naval fleet at Hong Kong, was ordered to find the Spanish fleet in the Philippines and destroy it. On April 30, 1898, Dewey’s squadron moved into Manila Bay and, after a four hour battle, defeated the Spanish fleet. At the same time, the United States attempted to block the harbor of Santiago de Cuba by sinking the coal ship Merrimac. The sinking did not go as planned and Major General William R. Shafter landed 16,000 men on the Cuban coast and charged the hills of El Caney and San Juan.

On July 3, 1898, Admiral Cervera, the Spanish commander, tried to evacuate his fleet from the harbor leading to a battle with the American ships. After the battle, 600 Spaniards were killed, Cervera taken prisoner, Santiago surrendered, and the three-month war over. A peace treaty was signed in Paris on December 10, 1898 in which Spain agreed to evacuate Cuba and surrender their territories of Puerto Rico, the Philippines and Guam to the United States. In return, the United States agreed to pay Spain $20 million.

William Washington Gordon, II (1834-1912) was a graduate of Yale University, a cotton factor and commission merchant in Savannah. He fought in the Civil War under General Stuart. After the war, he served in the Georgia House of Representatives. Gordon entered the Spanish-American War as Brigadier General of the United States Volunteers. In 1857, he married Eleanor “Nelly” Lytle Kinzie (1835-1917), of Chicago. During the Spanish-American War, Nelly tended to sick and wounded soldiers being sent home by train from a camp in Fernandina, Florida, where they were overwhelmed with typhoid fever. When one of the young volunteers, Private Charles Perry, died on the train, Nelly brought his body to her home in Savannah, had him embalmed and sent properly on to his family in Indiana. Her benevolence was noted in the newspapers, and acknowledged by the boy’s family and pastor. 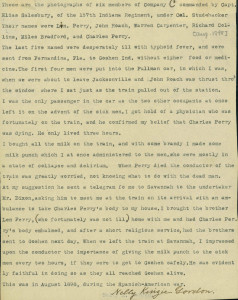 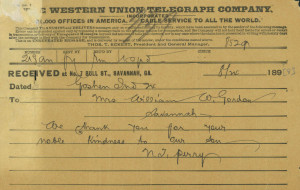 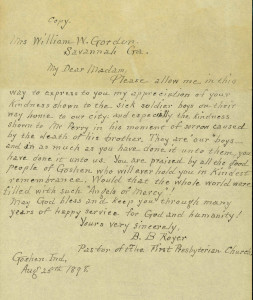