From the Great Depression through the New Deal and the publication of Margaret Mitchell’s Gone with the Wind, the 1930s were an important time in 20th century Georgia history. Browse the page below to learn more about Georgia in the 1930s.

The Great Depression was an international economic slump lasting approximately from 1929 until 1939. It was the longest and most severe depression ever experienced by the industrialized Western world. In the United States, the Great Depression began with the catastrophic collapse of the stock market on October 29, 1929, known as “Black Tuesday.” The collapse of the market led to the failure of more than 10,000 banks, the nationwide loss of confidence in the economy, and therefore reduced spending and output. The result was widespread unemployment (an estimated 12 to 15 million workers were unemployed at one time) and U. S. manufacturing falling 54%. 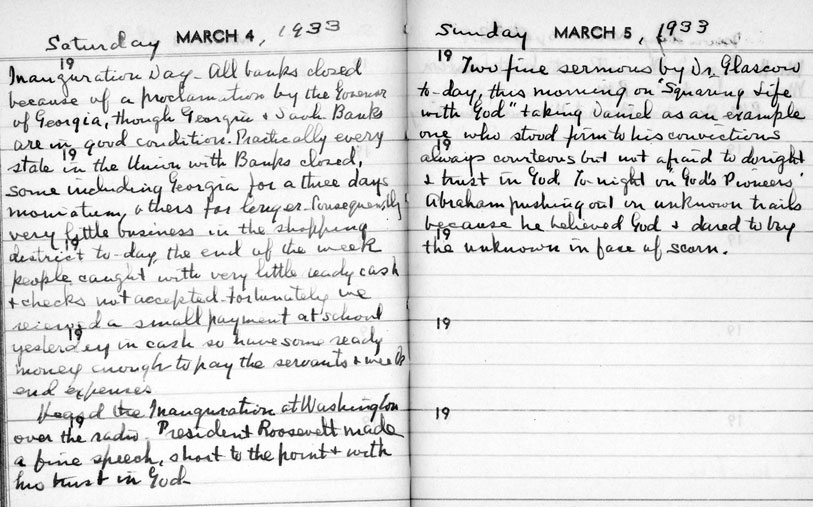 Economic distress led to the election of Democrat President Franklin D. Roosevelt. During his first one hundred days of office, in early 1933, Roosevelt introduced a large number of programs aimed at relief, recovery and reform. The new programs included the Civilian Conservation Corps (CCC), the Home Owners’ Loan Corporation (HOLC), and the Works Progress Administration (WPA). The New Deal, as Roosevelt’s programs became known, failed to end the Great Depression. The Depression did not end until the outbreak of World War II when American factories were flooded with orders for arms and munitions. The New Deal has influenced the role of the federal government ever since, it enhanced the power of the federal government over state governments and created a system of government action in the face of a recession to prevent another great depression. 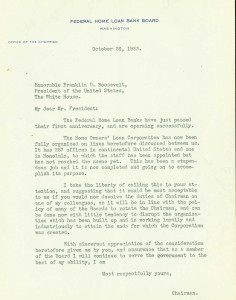 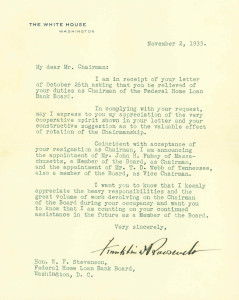 From the Walter F. Stevenson letters and invitations, MS 1044.

The HOLC, organized in 1933, helped people keep their homes by refinancing mortgages. William Francis Stevenson, a South Carolina attorney and politician, served on the Federal Home Loan Bank Board from 1933 to 1939. In October 1933, Stevenson reported the progress of the HOLC during its first year to President Roosevelt, informing him that 257 offices had already been established. Roosevelt replied congratulating him on the HOLC’s accomplishments.

The CCC, created on March 31, 1933, was an environmental program which put 2.5 million boys and men to work maintaining and restoring forests, beaches, and parks for $1 a day and room and board. The CCC was one of the most successful and well-received New Deal programs. It was discontinued in 1942 as men were needed for service in World War II. William A. McCormick joined the CCC in 1937 and was placed at Camp Applegate in Ruch, Oregon. He was discharged in March 1938, and later went on to enlist in the United States Army in 1942. 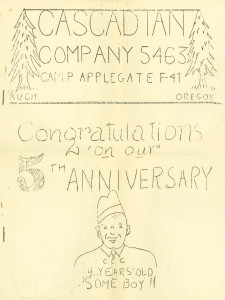 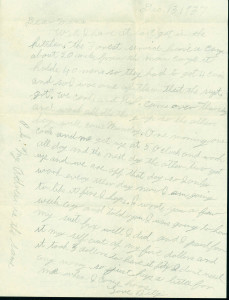 The largest and most comprehensive New Deal program was the WPA, established in 1935 to provide work through a variety of public-work projects, many in the construction field. The local Savannah WPA program (Works Progress Administration-District 8) kept a scrapbook of professional and service projects, including photographs, pamphlets, sketches, and miscellaneous items relating to local projects like the Georgia State Indexing Project and the Education Project. The WPA was discontinued in December 1943 with increased employment generated by World War II. 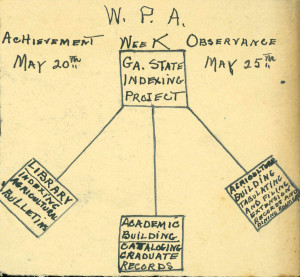 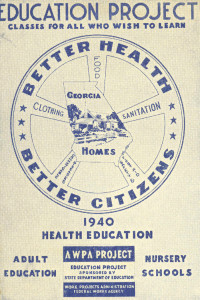 The Federal Writers’ Project was established, along with other cultural projects in theater, music and art, to provide work for unemployed artists and writers. The Savannah Unit of the Georgia Writers’ Project was begun in 1936 and operated, first as part of the Federal Project and then as part of the State Project, until the end of 1942. During this period, the local unit compiled historical research resulting in the publications The Savannah Guide (1937), Drums and Shadows (1940), Savannah River Plantations (1947), and numerous sketches of local historical personalities and important sites. One such piece is the handwritten historical sketch of the log blockhouse in Jackson County, Georgia, built in 1793. 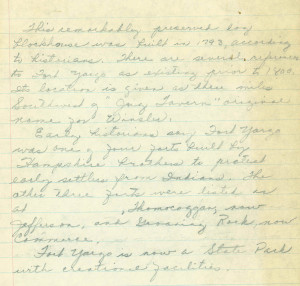 Gone with the Wind

Gone with the Wind, an American novel by Margaret Mitchell, of Atlanta, Georgia, was published in 1936 and won the Pulitzer Prize in 1937. The novel is one of the most popular of all time and relates the story of a rebellious Georgia woman named Scarlett O’Hara and her travails with friends and family in the midst of the antebellum South, the American Civil War, and the Reconstruction period. Mitchell’s work reflected a strong commitment to the Confederacy and a romanticized view of Southern culture before the Civil War.

Film producer David O. Selznick purchased the rights to the book for $50,000, a record amount at the time. Gone with the Wind, the most expensive film produced up to that time at $4 million, premiered in Atlanta on December 15, 1939, starring Vivian Leigh and Clark Gable. The movie, one of the few films made with three-color Technicolor at the time, earned thirteen Academy Award nominations and eight Academy Awards.

On March 16, 1940, the Hibernian Society of Savannah, Georgia, held a dinner for their 128th anniversary. For the program, they chose an image of Tara Hall, the plantation home from the novel. Four days after the dinner, Margaret Mitchell wrote Joseph W. McAvoy explaining why she chose the name “Tara,” to honor Tara’s Hill, Ireland, an important Irish historical landmark and memorialized in the poem “The Harp that Once through Tara’s Hall.” 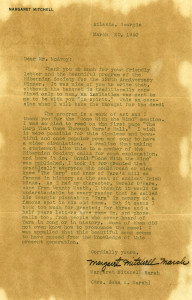 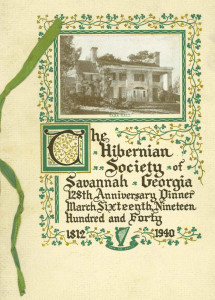 From the Margaret Mitchell letter and program, MS 919.