Social Movements of the 20th Century

Social Movements of the 20th Century

From the Women’s Suffrage Movement to the founding of the Girl Scouts of the United States of America and Civil Rights Movement, the 20th century was a time of great social change in Georgia and the U.S. Browse the page below to learn more about these social movements and how Georgians played significant roles in them. 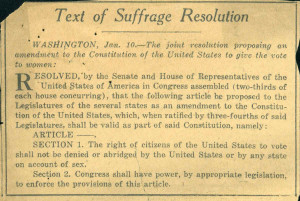 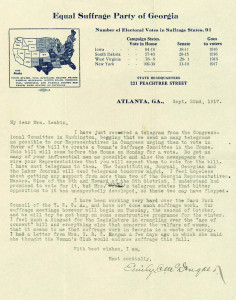 The Women’s Suffrage Movement was an international social, economic, and political reform movement aimed at extending suffrage (the right to vote) to women. The National Woman Suffrage Association was formed in 1869 with the goal of securing an amendment to the U. S. Constitution giving women the right to vote. Between 1869 and 1919, the organization obtained a hearing before every Congress. After several failed attempts to pass a bill in Congress for the proposed amendment, on May 21, 1919, the House passed the bill calling for women’s suffrage.

After being passed by the Senate, two-thirds of the states had to ratify the amendment. Within a few days, Illinois, Wisconsin, and Michigan had passed the ratifications. Tennessee became the 36th state to ratify the amendment fulfilling the two-thirds majority requirement. The 19th Amendment, allowing women the right to vote, was ratified in the summer of 1920, and women voted in the 1920 Presidential election.

The Equal Suffrage Party of Georgia led the statewide suffrage movement in Georgia. During 1917, they led a letter-writing campaign to Congress urging them to vote in favor of a bill to create a Woman’s Suffrage Committee in the House of Representatives. In September 1917, Emily McDougal wrote suffragist Ruth Stewart Leaken expressing her frustration, “I feel such a disgust for the Legislature in wrangling over the “age of consent” bill and everything else that concerns the welfare of women, that it seems to me that suffrage work in Georgia is a waste of energy.” Leaken was a prominent club woman and State Chairman of the Women’s Committee of the Liberty Loan Drives making her an ideal suffragist. 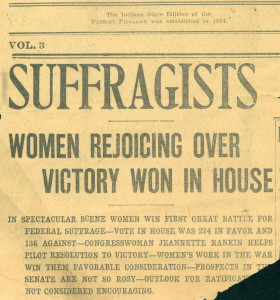 On March 12, 1912, Juliette Gordon Low (1860-1927), known as Daisy, organized the first troop of Girl Scouts in Savannah, Georgia, with only eighteen girls. Low based the youth organization for girls on the Boy Scouts of England after meeting its founder, Robert Baden-Powell, in London. Low desired to give all young girls something to bring them out of their homes to serve the community and experience the open air. The first Girl Scout Camp was at Lowlands at Bona Bella, outside of Savannah.

Walter John Hoxie (1848-1934), a native of New York, had moved to Bona Bella in 1901. The naturalist formed a nature group for young girls, many of whom were among the first Girl Scouts. Hoxie wrote the first Girl Scout Handbook called How Girls Can Help Their Country. 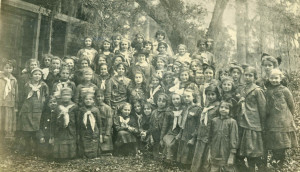 Photograph of Girl Scouts, Savannah, with their founder, Juliette Low, circa 1917-1927. From the Walter John Hoxie papers, MS 403. 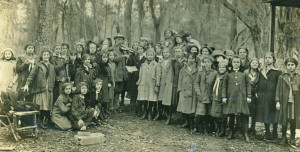 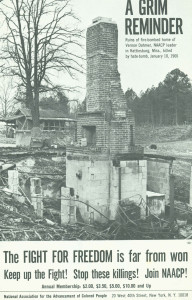 Flyer “”A Grim Reminder…The Fight for Freedom is Far from Won…” From the Ethel Hyer Family papers, MS 2117.

The Civil Rights Movement in the United States has been a long, primarily nonviolent struggle to bring full civil rights and equality to all Americans. It has been made up of many movements, for instance, the Women’s Suffrage Movement. However, the term is often used specifically to refer to the struggles between 1945 and 1970 to end discrimination against African-Americans and to put an end to racial segregation. With the end of Reconstruction, many states began to institute discriminatory practices and laws aimed at African-Americans.

The 1896 Plessy v. Ferguson case upheld the “separate but equal” system that soon spread to schools, movie theaters, bus stations, etc. States enforced the segregation of the races and the second-class status of African-Americans through what is known as Jim Crow laws. In many cities and towns, African-Americans were not allowed to use the same entrances, water fountains, restrooms, schools, restaurants, or even playgrounds as whites. Voting rights discrimination was widespread and prevented the greater portion of African-Americans from exercising their constitutional rights and supporting government and laws that could change the status quo.

The Civil Rights Movement to bring about equality for African-Americans was led by church leaders and students: the Southern Christian Leadership Conference founded in 1957 organized protests; the Student Nonviolent Coordinating Committee (SNCC) founded in 1957 organized sit-ins, freedom rides, voter registration drives, and protests; and the National Association for the Advancement of Colored People (NAACP), founded in 1909, provided legal counsel for jailed demonstrators, and tested segregation and discrimination through the courts. Leaders at the forefront of the movement included Rev. Martin Luther King, Jr., Ralph Abernathy, and Hosea Williams. The majority of participants in the movement adhered to the principles of nonviolence. In 1964, the United States Congress passed the Civil Rights Act requiring equal access to public places and outlawing employment discrimination. The Voting Rights Act of 1965 helped protect the right to vote for all citizens regardless of race. 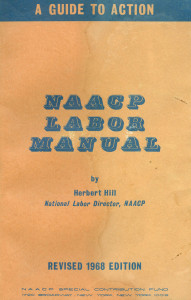 Ethel Thurman Hyer was the first woman to serve as president of the Rome, Georgia Chapter of the NAACP, a position she held for fifteen years. Hyer was very active in the Civil Rights Movement during the late 1950s and early 1960s. In 1973, she was honored by the city of Rome for her community work and given a key to the city. Hyer’s papers include many flyers, brochures, and manuals produced by the NAACP in an effort to educate and encourage the African-American community regarding their rights during the 1960s.

In Savannah, Georgia, the civil rights movement was relatively peaceful compared to that of other southern cities, greatly due to the cooperation of local businessmen and politicians with African-American leadership. In 1963, the Bi-racial Committee, composed of members of the Civic Progress group and several prominent Civil Rights leaders, met several times to discuss how to bring about an end of segregation in local hotels, theaters, and restaurants. Minutes from the August 1, 1963, meeting outline terms for the beginning of the desegregation of certain types of local businesses. The following day, Reverend William Franklin Stokes, of the First African Baptist Church, wrote attorney A. Pratt Adams, Jr. that he would continue to work towards a successful desegregation and “a continued pleasant relationship.”

Selected items from the A. Pratt Adams, Jr. Collection, MS 2165.