The Georgia Historical Society and the UVA Club of Savannah will host a talk by Dr. Andrew O’Shaughnessy, Vice President of the Thomas Jefferson Foundation, Saunders Director of the Robert H. Smith International Center for Jefferson Studies at Monticello, and Professor of History at the University of Virginia.

One of Thomas Jefferson’s greatest achievements—and one of which he was most proud—was the establishment of the University of Virginia. Based on his latest book, Andrew O’Shaughnessy explores Jefferson’s impact on public education, race relations, and his complex legacy in modern America.

The free event is on Thursday, September 22, 2022, at 6:00 p.m., at Wesley Monumental United Methodist Church, 429 Abercorn Street, in Savannah, with a book signing to follow.

This event is presented by 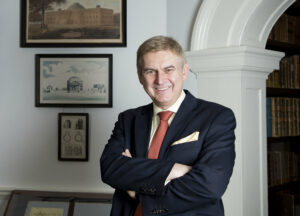 Andrew O’Shaughnessy is the Vice President of Monticello, the Saunders Director of the Robert H. Smith International Center for Jefferson Studies at the Thomas Jefferson Foundation and Professor of History at the University of Virginia.  His most recent book is The Illimitable Freedom of the Human Mind: Thomas Jefferson’s Idea of a University (Charlottesville: University of Virginia Press, 2021).  He has previously published The Men Who Lost America: British Leadership, the American Revolution, and the Fate of the Empire (New Haven: Yale University Press, 2013), which received eight national awards including the New York Historical Society American History Book Prize, the George Washington Book Prize and The Society of Military History Book Prize. He is also the author of An Empire Divided: The American Revolution and the British Caribbean (Philadelphia: University of Pennsylvania Press, 2000) which was the alternate designate selection of the History Book Club. A Fellow of the Royal Historical Society, he is an editor of the Jeffersonian America series published by the University of Virginia Press.