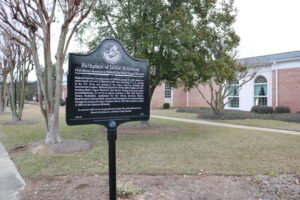 The Birthplace of Jackie Robinson historical marker, erected at the Roddenbery Memorial Library in Cairo, Georgia 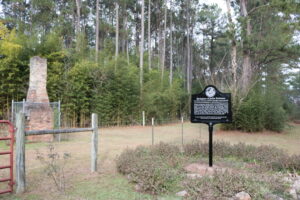 “The Georgia Historical Society and the people of this state are deeply grateful to Major League Baseball and Commissioner Rob Manfred for supporting the recasting and long-term care of this important historical marker,” said GHS President and CEO W. Todd Groce. “Because of their timely and invaluable help, the inspiring story and lasting legacy of Georgia native Jackie Robinson will continue to be told and honored for many years to come.”

Commissioner of Baseball Robert D. Manfred, Jr. said: “We are grateful for the Georgia Historical Society and their efforts to preserve the birthplace marker of Jackie Robinson in Cairo. We hope this historic monument will continue to serve as an example of a life filled with courage and strength for generations of young people.”

Robinson was born 13 miles south of Cairo on January 31, 1919, before he and his family moved to California in 1920. After attending U.C.L.A., serving in the U.S. Army, and playing in the Negro American Baseball and International Leagues, Robinson played for the Brooklyn Dodgers in 1947, breaking Major League Baseball’s color barrier. Adding to his many athletic accomplishments, he served as special assistant to New York Governor Nelson Rockefeller, established the first African American Modern Bank/Freedom National Bank, and provided housing for the underprivileged through his construction firm. Robinson died in 1972. His birthplace burned in 1996, but the chimney still stands.

ABOUT THE GEORGIA CIVIL RIGHTS TRAIL
As part of the ongoing work of the Georgia Historical Marker Program to recognize the rich diversity of our state’s past, GHS’s Georgia Civil Rights Trail (CRT) initiative focuses broadly on the economic, social, political and cultural history of the Civil Rights Movement. Recognizing that the struggle for civil and human rights began long before the mid-twentieth-century Movement, the Civil Rights Trail includes historical markers that explore stories from Reconstruction through the late twentieth century.