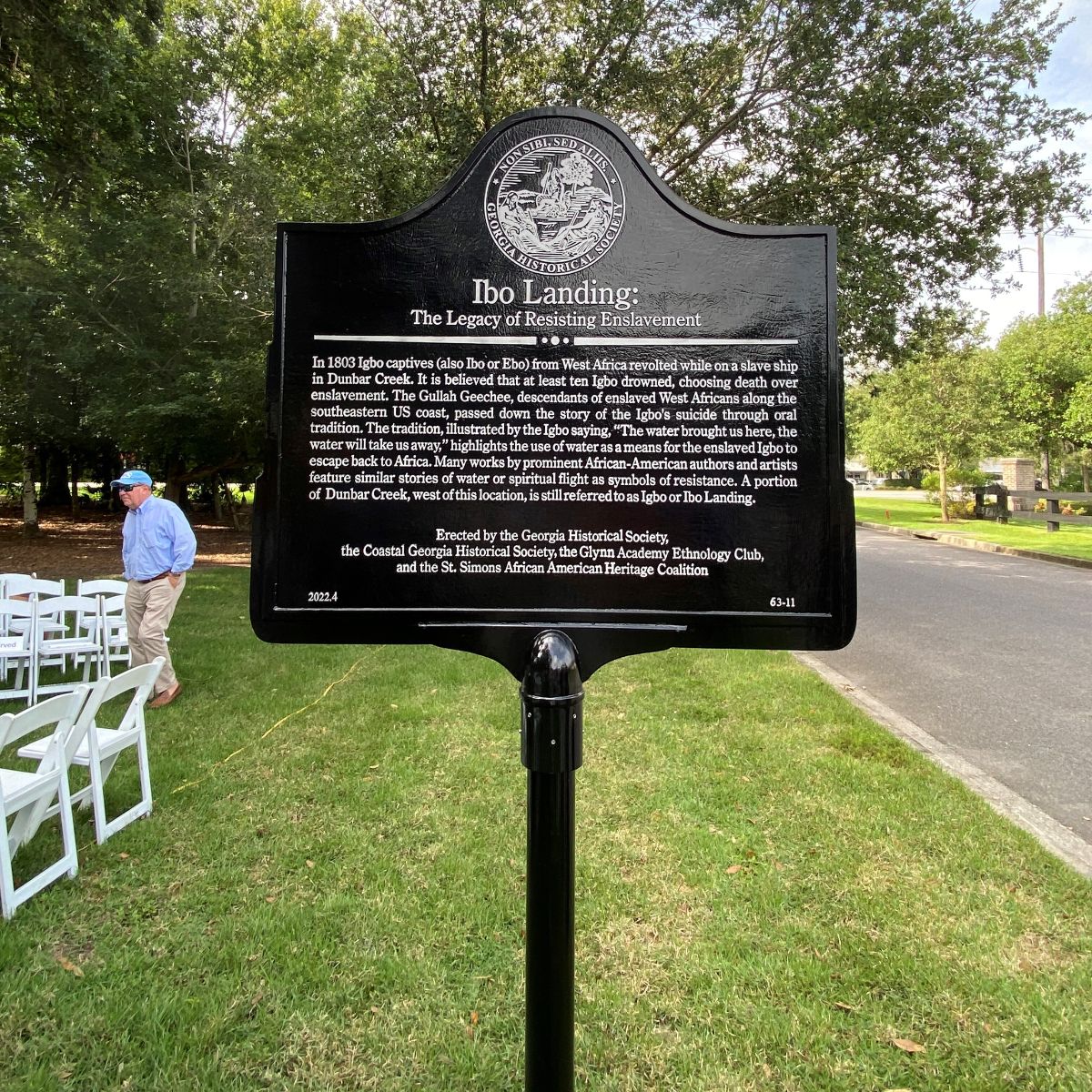 St. Simons Island, GA, May 26, 2022 – The Georgia Historical Society (GHS) unveiled a new Georgia Civil Rights Trail historical marker recognizing the legacy of Ibo Landing on May 24, 2022, in Glynn County. This is the first historical marker that discusses the importance of oral tradition in the remembrance of historical events.

Ibo Landing (also spelled Ebo and Igbo) is one of the most storied events in St. Simons Island history. In 1803, captive members of the Igbo tribe of West Africa revolted on their slave ship in Dunbar Creek. They chose to drown rather than be enslaved.

“The Ibo Landing marker explores the mass suicide of enslaved people at Dunbar Creek in 1803 and examines the cultural impact of that history, which has been passed down through the oral traditions of the Gullah-Geechee,” says GHS Marker Manager Elyse Butler. “With this new historical marker, anyone can simply walk up and learn more about the rich Gullah-Geechee tradition that helped preserve the memory of this act of resistance.”

For more information about the Ibo Landing historical marker dedication or the Georgia Historical Society marker program, please contact Keith Strigaro, Director of Communications, at 912.651.2125, ext. 153 or by email at kstrigaro@georgiahistory.com.

In 1803 Igbo captives (also Ibo or Ebo) from West Africa revolted while on a slave ship in Dunbar Creek. It is believed that at least ten Igbo drowned, choosing death over enslavement. The Gullah Geechee, descendants of enslaved West Africans along the southeastern US coast, passed down the story of the Igbo’s suicide through oral tradition. The tradition, illustrated by the Igbo saying, “The water brought us here, the water will take us away,” highlights the use of water as a means for the enslaved Igbo to escape back to Africa. Many works by prominent African-American authors and artists feature similar stories of water or spiritual flight as symbols of resistance. A portion of Dunbar Creek, west of this location, is still referred to as Igbo or Ibo Landing.