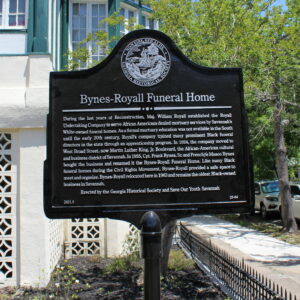 “The Bynes-Royall Funeral Home has provided funeral services for over 140 years in Savannah,” said GHS Marker Manager Elyse Butler. “This new historical marker, along with the Louis B. Toomer: Founder of Carver State Bank and The McKelvey-Powell Building markers, highlights the importance of the West Broad Street (now Martin Luther King Jr. Blvd) role as the historical business and cultural epicenter for Savannah’s Black community.”

Major William Royall opened the Royall Undertaking Company following the 1876 yellow fever epidemic. His work transformed the funeral business in Georgia by training black morticians to work in the industry. In 1955 Frank and Frenchye Bynes purchased the business that would later play a role in the Civil Rights Movement as the site of meetings with Civil Rights icons like Dr. Martin Luther King, Jr. and W.W. Law among others. Today it is the oldest continuously Black-owned business in Savannah and remains under the ownership of Bynes descendants.

In his remarks, the Honorable Van R. Johnson II, Mayor of Savannah, proclaimed May 8 as Bynes-Royall Day in the City of Savannah, stating, “Today we honor history- Georgia’s History, Savannah History, Black History. We honor resiliency and the perseverance of a family. We honor service to God, to the community, and to citizens during the toughest moments in their lives. We honor the Bynes family and the generations past, present, and future.”

The marker is located at the intersection of Barnard and West Hall Streets in Savannah’s Historic Landmark District. For further information about the Bynes-Royall Funeral Home, Inc, historical marker or the Georgia Civil Rights Trail Marker Program, please contact Patricia Meagher, GHS Director of Communications at 912.651.2125, ext. 153 or by email at pmeagher@georgiahistory.com.

During the last years of Reconstruction, Maj. William Royall established the Royall Undertaking Company to serve African Americans denied mortuary services by Savannah’s White-owned funeral homes. As a formal mortuary education was not available in the South until the early 20th century, Royall’s company trained many prominent Black funeral directors in the state through an apprenticeship program. In 1924, the company moved to West Broad Street, now Martin Luther King, Jr. Boulevard, the African-American cultural and business district of Savannah. In 1955, Cpt. Frank Bynes, Sr. and Frenchye Mason Bynes bought the business and renamed it the Bynes-Royall Funeral Home. Like many Black funeral homes during the Civil Rights Movement, Bynes-Royall provided a safe space to meet and organize. Bynes-Royall relocated here in 1963 and remains the oldest Black-owned business in Savannah.

Erected by the Georgia Historical Society and Save Our Youth Savannah