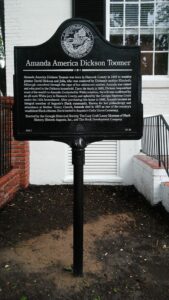 Amanda America Dickson Toomer was born on November 20, 1849, in Sparta, Georgia, through the rape of her adolescent enslaved mother, Julia, by her father, David Dickson a 41-year-old wealthy White planter. Through her father’s will, which was contested by Toomer’s White family members, she became one of the wealthiest women of her time, and supported the Augusta community through her philanthropic efforts.

“The Amanda America Dickson Toomer historical marker highlights the accomplishments of Mrs. Toomer and the trial that shaped her life,” said GHS Marker Manager Elyse Butler. “From Amanda America Dickson Toomer, the founding and impact of Mother Trinity AME Church, and the Riot of May 11-12, 1970 historical markers, the Augusta community has helped GHS grow the Georgia Civil Rights Trail to help tell a more complete story of the struggle for human and civil rights in Georgia by highlighting events and people from the period of Reconstruction to the modern movement in the late 20th century.”

The marker is located at the former home of Amanda America Dickson Toomer at 448 Telfair Street in Augusta. For further information about the Amanda America Dickson Toomer historical marker or the Georgia Civil Rights Trail Marker Program, please contact Patricia Meagher, GHS Director of Communications at 912.651.2125, ext. 153 or by email at pmeagher@georgiahistory.com.

Amanda America Dickson Toomer was born in Hancock County in 1849, to wealthy planter David Dickson and Julia, who was enslaved by Dickson’s mother Elizabeth. Although conceived through the rape of her adolescent mother, Amanda was raised and educated in the Dickson household. Upon his death in 1885, Dickson bequeathed most of his wealth to Amanda. Contested by White relatives, the will was confirmed by an all-male White jury in Hancock County, and upheld by the Georgia Supreme Court under the 14th Amendment. After purchasing this home in 1886, Amanda became an integral member of Augusta’s Black community. Known for her philanthropy and attendance at Mother Trinity Church, Amanda died in 1893 as one of the country’s wealthiest Black citizens. She is buried in Augusta’s Cedar Grove Cemetery.