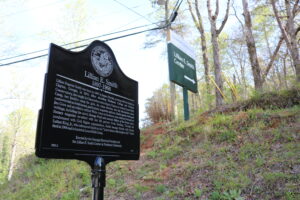 Lillian E. Smith was a writer and supporter of the Civil Rights Movement who spoke out against segregation, racism, and white supremacy. She openly challenged Jim Crow laws and acted as a critical White voice on Southern race relations through her writing, publication of literary magazines with her life partner, Paula Snelling, and her work at Laurel Falls Camp for Girls. In addition to promoting open discussions with young campers at Laurel Falls Camp, Smith also invited Black and White women to the camp for conversations regarding social issues faced by women, such as gender roles, segregation, and understanding international relations. She was also the author of multiple books, including Strange Fruit (1944) and Killers of the Dream (1949).

“Thinking back to my education, I never heard about Lillian Smith and her activism to create a more equitable society for all,” said Matthew Teutsch, Ph.D., Director of the Lillian E. Smith Center. “This historical marker, on the land where she lived and worked, and where so many Civil Rights activists visited, serves as a way to educate and inform others about her lasting impact.”

Lillian E. Smith’s father opened Laurel Falls Camp in 1920, and Smith took over its operations in 1925. The camp closed its doors in 1948, and when Smith died she was buried on the former camp’s grounds.

“The Lillian E. Smith historical marker joins over 50 historical markers across the state highlighting the struggle for human and civil rights in Georgia,” said GHS Marker Manager Elyse Butler. “Lillian E. Smith was a prolific writer, discussing and publishing controversial views on women’s rights and civil rights during a period when White women did not discuss these topics in public.”

The Georgia Historical Society’s Georgia Civil Rights Trail initiative focuses broadly on the economic, social, political, and cultural history of the Civil Rights Movement. Specifically, roadside historical markers tell the story of the Movement in Georgia by guiding audiences to the sites where history happened, inviting them to stand on the ground where struggles and events took place, and providing a foundation upon which to build and cultivate a deeper understanding of the past and its relevance to the present. The Georgia Civil Rights Trail highlights significant events from communities around the state to illustrate the overarching themes of education, leadership, massive resistance, white backlash, desegregation, and voting rights.

Lillian Eugenia Smith was born in 1897 in Jasper, Florida, moving with her family to Clayton, Georgia, in 1915. After attending Piedmont College and Peabody Conservatory, she taught in China before returning to Clayton to work at Laurel Falls Camp, her family’s camp for girls. As camp director, she led discussions about controversial societal issues, particularly on gender and race. Smith openly challenged Jim Crow and provided a critical White voice on Southern race relations through her writings, including the novel Strange Fruit and memoir Killers of the Dream, and a literary magazine co-edited with her life partner Paula Snelling. Through her involvement with Civil Rights organizations, Smith became friends with Martin Luther King, Jr., who referenced Smith in his “Letter from a Birmingham Jail.” Smith died in 1966 and is buried at Laurel Falls Camp.

Erected by the Georgia Historical Society and
the Lillian E. Smith Center at Piedmont University