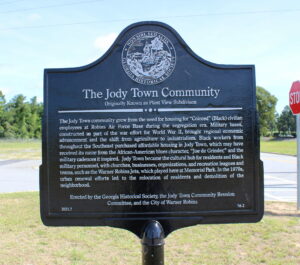 “The Jody Town Community historical marker tells the story of segregation during World War II and how the Jody Town ‘Plant View’ Community was created out of the need to house Black civilian employees of Robins Air Force Base,” said GHS Marker Manager Elyse Butler. “Even though urban renewal efforts led to the relocation of Jody Town’s residents, anyone can simply walk up to this marker located at Memorial Park to learn about the individuals and businesses that helped shape the development of Warner Robins.”

Originally known as the Plant View subdivision, Jody Town was a segregated community for the Black civilian employees of Robins Airforce Base.

Through the development of churches, salons, schools, restaurants, and other small businesses, residents created a thriving community that also promoted extracurricular activities such as Scouts and recreational sports that encouraged community involvement for youth and families. With the end of segregation, Jody Town services became more racially integrated, and the community began receiving more money for upgrading public facilities from the City of Warner Robins. However, in the early 1970s under the Federal Urban Renewal Program, the city began displacing the original Jody Town community.

“Warner Robins has a rich history which includes many people from diverse backgrounds and part of this diversity derives from the Black families who were present in Wellston and those who came after hearing the news for the site of the new army air depot,” said Shirlyn Johnson-Granville, Chair of the Jody Town Reunion Committee. “One cannot accurately depict the history of Warner Robins, the state of Georgia or the country, without including the families who contributed to its growth and success…The residents of Jody Town and their descendants played an integral role in the development, growth, and success of Warner Robins.”

The marker is located at the entrance of Memorial Park, 800 South First Street, Warner Robins, GA 31093. For further information about The Jody Town historical marker or the Georgia Civil Rights Trail Marker Program, please contact Patricia Meagher, GHS Director of Communications at 912.651.2125, ext. 153 or by email at pmeagher@georgiahistory.com.

The Jody Town community grew from the need for housing for “Colored” (Black) civilian employees at Robins Air Force Base during the segregation era. Military bases, constructed as part of the war effort for World War II, brought regional economic advancement and the shift from agriculture to industrialism. Black workers from throughout the Southeast purchased affordable housing in Jody Town, which may have received its name from the African-American blues character, “Joe de Grinder,” and the military cadences it inspired. Jody Town became the cultural hub for residents and Black military personnel, with churches, businesses, organizations, and recreation leagues and teams, such as the Warner Robins Jets, which played here at Memorial Park. In the 1970s, urban renewal efforts led to the relocation of residents and demolition of the neighborhood.

Erected by the Georgia Historical Society, the Jody Town Community Reunion Committee, and the City of Warner Robins