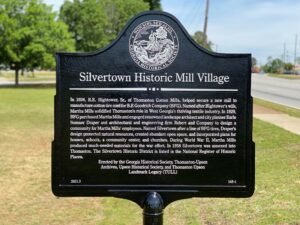 May 6, 2021, Atlanta, Georgia – The Georgia Historical Society has announced the unveiling of a new historical marker in Upson County commemorating the Silvertown Historic Mill Village in Thomaston. The village, which was founded by the B.F. Goodrich Company (BFG) in 1929 to house the employees of Martha Mills, created a sense of community for those who manufactured tire cording for BFG. The marker was erected by GHS, Thomaston-Upson Archives, Upson Historical Society, and Thomaston Upson Landmark Legacy (TULL).

Due to the ongoing pandemic, the marker was dedicated in a private ceremony attended by Mrs. Jamesan Gramme, Director of the Thomaston-Upson Archives; The Honorable J.D. Stallings, Mayor of the City of Thomaston; Ms. Sandra Keadle, Keadle Lumber Foundation; Dr. W. Todd Groce, President and CEO of the Georgia Historical Society; Mrs. Kay Hightower, Chairman Emeritus of the Georgia Historical Society; and Lori Showalter Smith, Thomaston-Upson Chamber of Commerce.

“The Silvertown Historic Mill Village marker is a testament to the strong sense of community felt by the residents of Silvertown, both current and past,” says Gramme. “Through the efforts of the B.F. Goodrich Company, the mill village provided employees of Martha Mills and their families with a livelihood, housing, recreation, beautiful landscape, and most importantly, a source of pride. The sense of pride has continued into the present day and with the addition of the historical marker, our community can forever remember what made Silvertown such a unique treasure.”

The marker is located at the historic entryway of Silvertown on the northern crescent of Park Drive in Thomaston, and is the first GHS historical marker erected in Upson County. For further information about the Silvertown Historic Mill Village historical marker or the Georgia Historical Marker Program, please contact Patricia Meagher, GHS Director of Communications at 912.651.2125, ext. 153 or by email at pmeagher@georgiahistory.com.