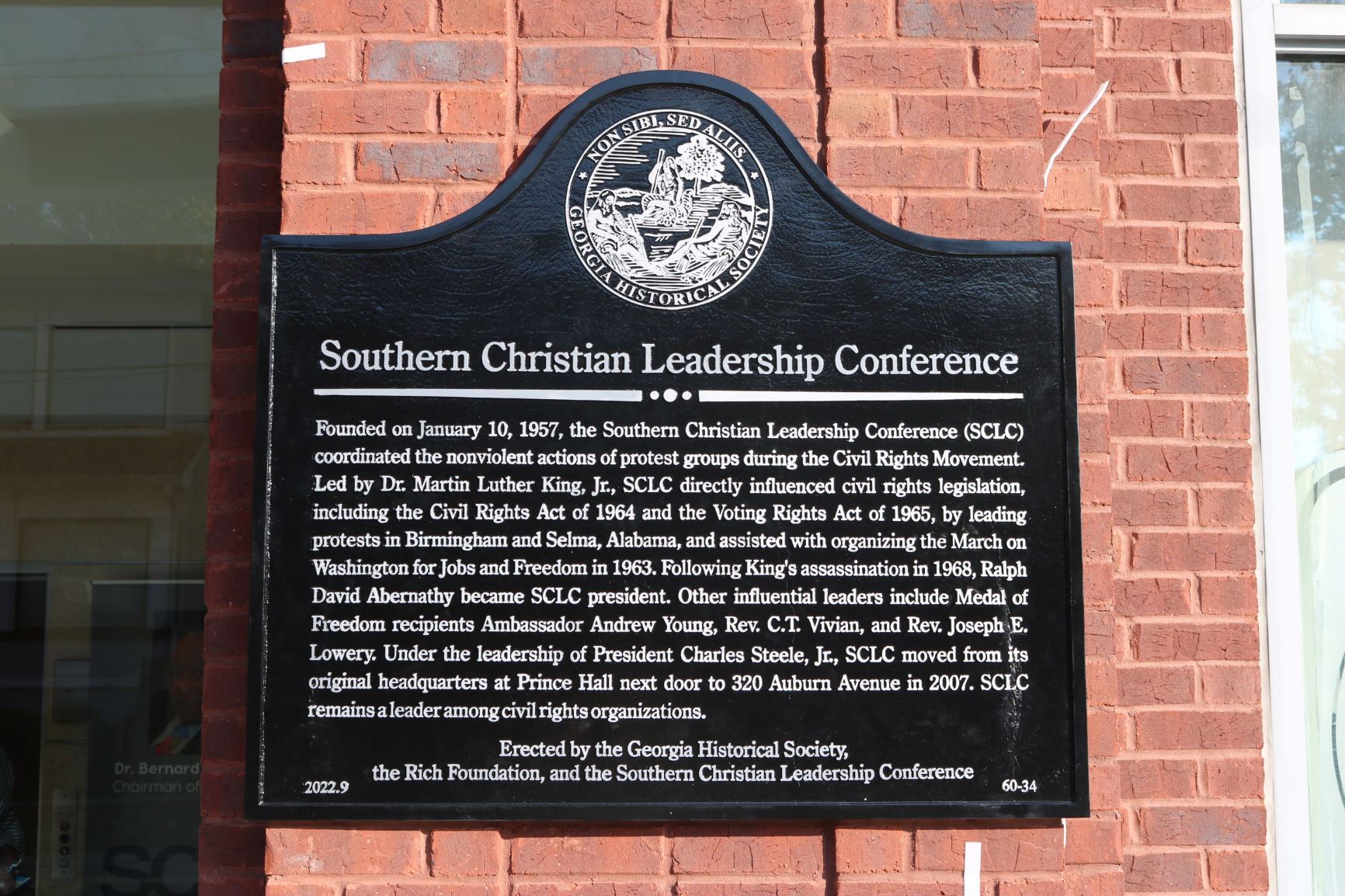 Atlanta, GA, November 8, 2022 – The Georgia Historical Society (GHS) unveiled a new historical marker recognizing the Southern Christian Leadership Conference (SCLC) on Thursday, November 3, 2022, in Atlanta. In partnership with The Rich foundation, Inc. and SCLC, this historical marker is the newest addition to GHS’s Georgia Civil Rights Trail. It highlights SCLC’s contributions to the Civil Rights Movement by coordinating nonviolent protests in the 1960s.

The Southern Christian Leadership Conference was founded on January 10, 1957, by Rev. Dr. Martin Luther King, Jr., and other African-American Civil Rights leaders. During the Movement, SCLC joined local efforts throughout the South to coordinate campaigns. The organization brought visibility to the struggle for civil rights which created a foundation for the passage of the Civil Rights Act of 1964 and the Voting Rights Act of 1965.

Today, the National SCLC Headquarters stands on historic Auburn Avenue in Atlanta. Prior to the Civil Rights Movement, the Avenue was the center of African-American life in Atlanta. Rev. Dr. Martin Luther King, Jr. was born on the street and preached at Ebenezer Baptist Church, where he and his co-founders created SCLC. SCLC continues to be a nonviolent social activist organization dedicated to fighting against social and racial injustices.

“We appreciate the acknowledgement, but we do this work because it was what we are called to do!” said Dr. Charles Steele, Jr., National President and CEO of SCLC. “When we built this building in 2007, it was in part to center our headquarters on a historic street, in a historic city and near the birthplace of Dr. King. We wanted to make sure we were a beacon for justice and fairness.” 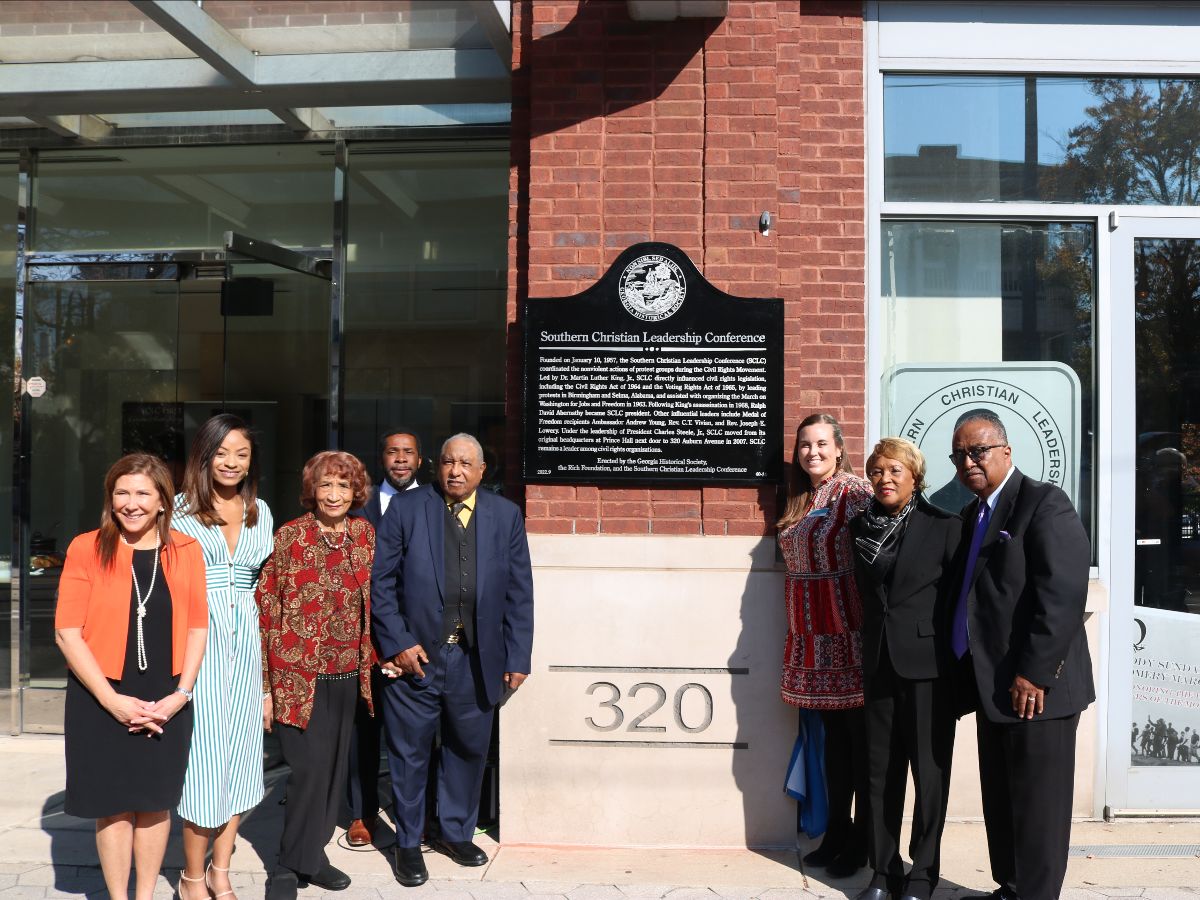 For more information about the Southern Christian Leadership Conference historical marker dedication or the Georgia Historical Society marker program, please contact Keith Strigaro, Director of Communications, at 912.651.2125, ext. 153 or by email at kstrigaro@georgiahistory.com.

Founded on January 10, 1957, the Southern Christian Leadership Conference (SCLC) coordinated the nonviolent actions of protest groups during the Civil Rights Movement. Led by Dr. Martin Luther King, Jr., SCLC directly influenced civil rights legislation, including the Civil Rights Act of 1964 and the Voting Rights Act of 1965, by leading protests in Birmingham and Selma, Alabama, and assisted with organizing the March on Washington for Jobs and Freedom in 1963. Following King’s assassination in 1968, Ralph David Abernathy became SCLC president. Other influential leaders include Medal of Freedom recipients Ambassador Andrew Young, Rev. C.T. Vivian, and Rev. Joseph E. Lowery. Under the leadership of President Charles Steele, Jr., SCLC moved from its original headquarters at Prince Hall next door to 320 Auburn Avenue in 2007. SCLC remains a leader among civil rights organizations.

Erected by the Georgia Historical Society, the Rich Foundation, and the Southern Christian Leadership Conference

ABOUT THE RICH FOUNDATION
The Rich Foundation is a private Atlanta, Georgia, foundation whose purpose is to benefit non-profit organizations in the field of arts, civics, education, health, environment, and social welfare in the metropolitan Atlanta area. While the Foundation supports all of these areas, its primary focus has been education and social justice. Established in 1943, the Foundation was created to distribute a share of the profits of Rich’s, Inc., the Atlanta department store. Through the years, the Foundation has been a major supporter of Atlanta’s charitable and educational life.