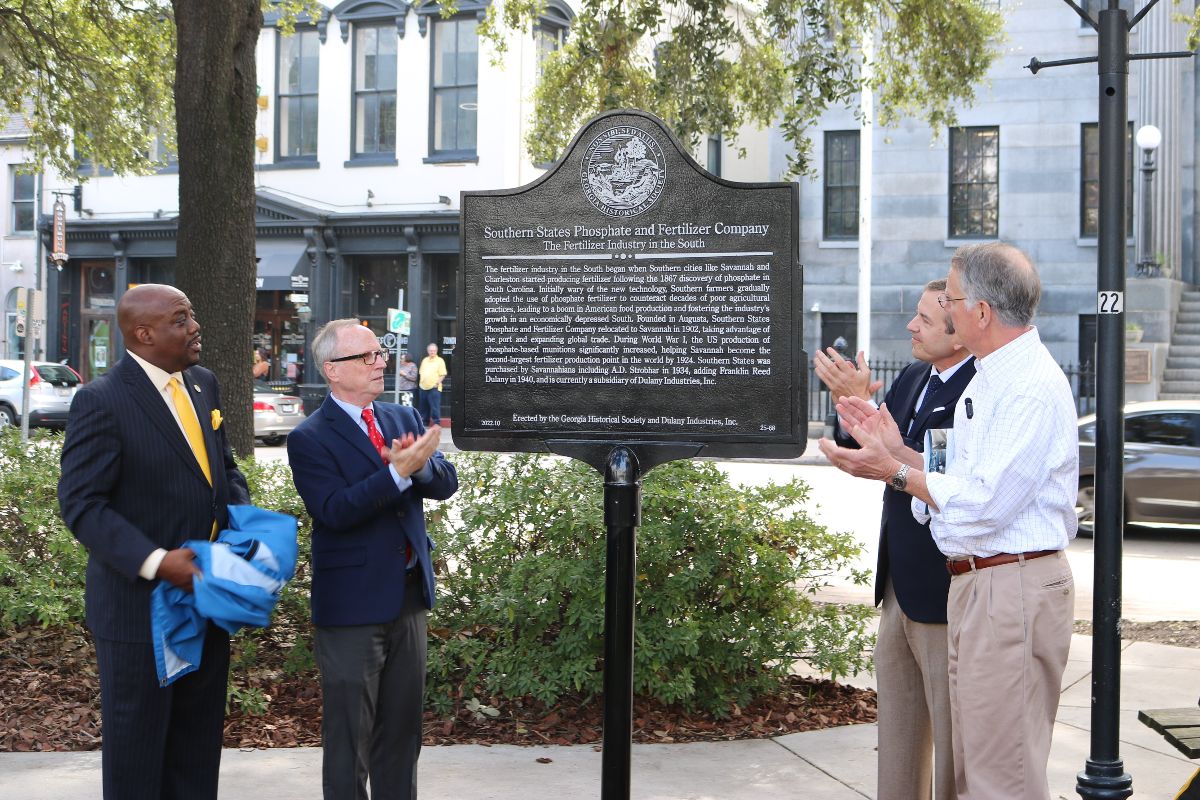 Savannah, GA, November 21, 2022 – The Georgia Historical Society (GHS) unveiled a new Business History Initiative historical marker in partnership with Dulany Industries, Inc. recognizing the impact of the fertilizer industry in the South on Tuesday, November 15, 2022, in Savannah. Southern States Phosphate and Fertilizer Company was an important company in the industry, particularly in Georgia.

The invention of chemical fertilizers in the 1800s significantly impacted Georgia’s agricultural economy. Superphosphate fertilizer was so successful for cotton that production in Georgia more than doubled between 1870 and 1880. A more scientific approach to farming developed, and Georgia became a pioneer in agricultural education and regulation. Georgia established one of the nation’s first colleges of agriculture and was the first to establish a state Department of Agriculture.

“Although few realize it today, chemical fertilizer revolutionized agriculture in the United States,” said W. Todd Groce, President & CEO of the Georgia Historical Society. “This was especially true in the South, where the fertility of the topsoil was depleted after generations of intensive farming. This historical marker will remind the public of the important role that the industry, and Southern States Phosphate & Fertilizer Company in particular, played in regenerating agricultural production, thereby helping to feed and clothe the world.”

Established in 1897, Southern States Phosphate and Fertilizer Company was one of fourteen fertilizer companies in Savannah. By 1985, only it remained. For over a century, the Southern States Phosphate and Fertilizer Company provided the chemical fertilizers that helped make Georgia one of the top agricultural states in the nation. The company continued to produce sulfuric acid as well as superphosphate and ammoniated fertilizers until it ceased fertilizer production and changed its name to Dulany Industries in March 2000. Dulany Industries is now a diversified industrial-based company with locations in Savannah, Augusta, Wilmington, North Carolina, and Norfolk, Virginia. It is the parent company for Southern States Chemical, SeaGate Terminals, and SeaPoint Industrial Terminal Complex.

“We deeply appreciate the Georgia Historical Society recognizing the tremendous contribution that the fertilizer industry, represented by our family company Southern States Phosphate and Fertilizer Company, has made to the lives of Georgians over the past 125+ years,” said Reed Dulany III, President and CEO of Dulany Industries, Inc. “We’re incredibly honored to be part of Georgia history, to be headquartered in Savannah, and to receive this meaningful recognition.” 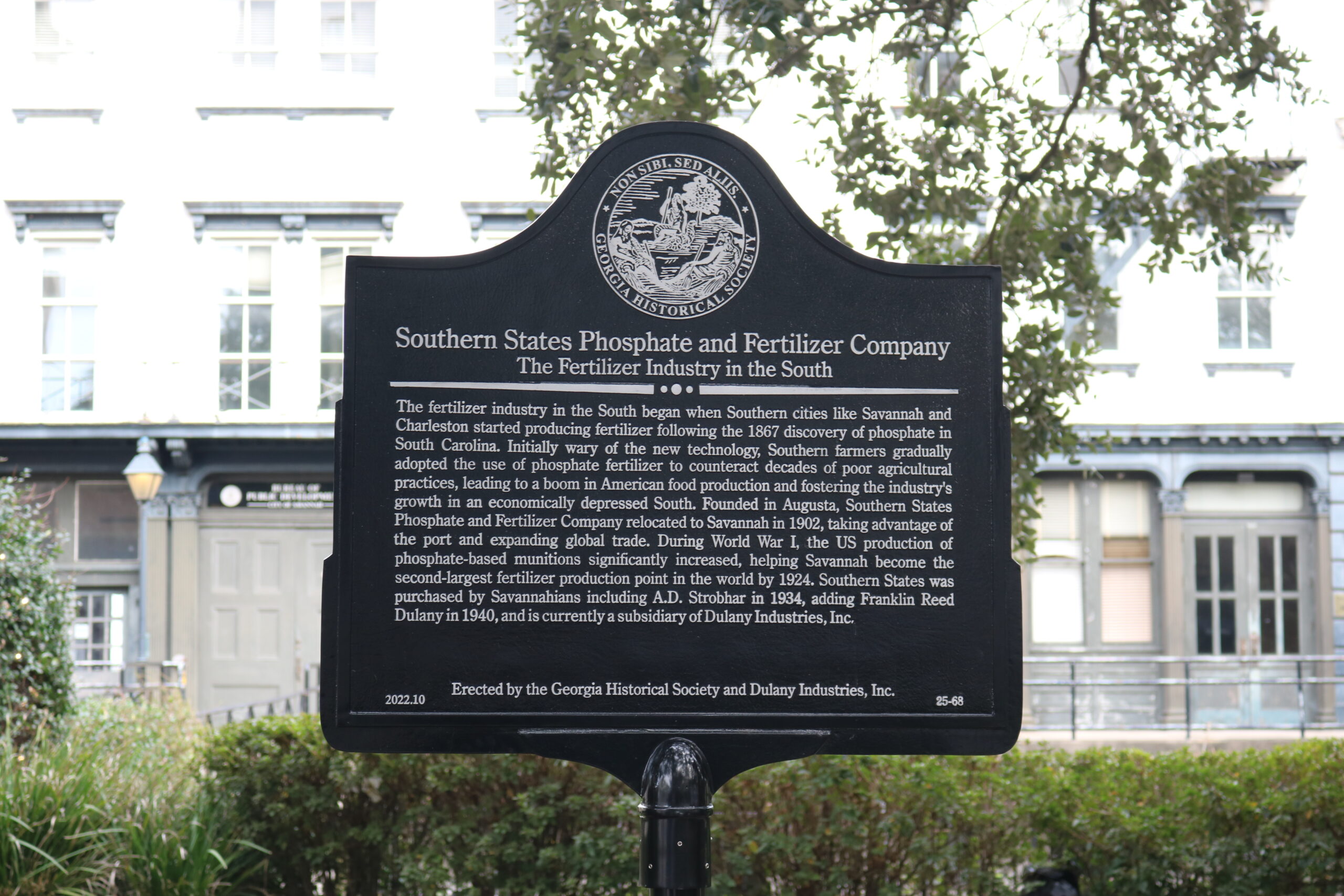 For more information about the Southern States Phosphate and Fertilizer Company historical marker dedication or the Georgia Historical Society marker program, please contact Keith Strigaro, Director of Communications, at 912.651.2125, ext. 153 or by email at kstrigaro@georgiahistory.com.

The fertilizer industry in the South began when Southern cities like Savannah and Charleston started producing fertilizer following the 1867 discovery of phosphate in South Carolina. Initially wary of the new technology, Southern farmers gradually adopted the use of phosphate fertilizer to counteract decades of poor agricultural practices, leading to a boom in American food production and fostering the industry’s growth in an economically depressed South. Founded in Augusta, Southern States Phosphate and Fertilizer Company relocated to Savannah in 1902, taking advantage of the port and expanding global trade. During World War I, the US production of phosphate-based munitions significantly increased, helping Savannah become the second-largest fertilizer production point in the world by 1924. Southern States was purchased by Savannahians including A.D. Strobhar in 1934, adding Franklin Reed Dulany in 1940, and is currently a subsidiary of Dulany Industries, Inc.

Erected by the Georgia Historical Society and Dulany Industries, Inc.