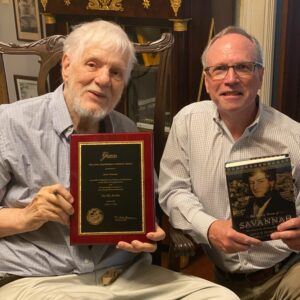 The honor was presented by Dr. W. Todd Groce, President and CEO of the Georgia Historical Society, at a small private ceremony at the Duncan home. The original ceremony and reception that had been scheduled in 2020 was cancelled when the COVID-19 pandemic made it unsafe for large groups to gather.

“I cannot think of anyone more deserving of this lifetime achievement award in the field of history than John Duncan,” said Groce. “As a scholar, educator, collector, and leading authority on the history of Savannah, John has devoted his professional career to teaching and using the power of history to make the world a better place. Thousands of college students and millions of visitors to our state have benefited from his tutelage and knowledge. It is a pleasure to honor him and to recognize his legendary accomplishments.”

“It’s an incredible honor,” added Duncan. “John Macpherson Berrien was one of the founders of the Georgia Historical Society, an organization I’ve been involved with for over half a century, and I’m good friends with one of Mr. Berrien’s descendants. I think it’s appropriate!”

Duncan, a 12th-generation Charlestonian, first came to Savannah in 1965 to teach history at Armstrong Jr. College, later Armstrong State University, when it was still located in the Armstrong House in historic downtown Savannah. His work in the classroom and in the field of history had an enormous impact on generations of students until his retirement in 1997.

John and his wife Virginia opened V&J Duncan Antique Maps, Prints, and Books on Monterey Square in Savannah in 1983, showcasing John’s enormous knowledge of rare books and manuscripts. While he was teaching, John completed his Ph.D. in history from Emory University in 1972. His dissertation was a two-volume history of “Slavery and Servitude in Colonial South Carolina.”

His most recent work, The Showy Town of Savannah: The Story of Architect William Jay, co-authored with Sandra Underwood and published by Mercer University Press in 2019, is a comprehensive biography of the man who designed the Telfair mansion, the William Scarborough House, and the Owens-Thomas House. The book has received numerous accolades including an “Award for Excellence in Research Using the Holdings of an Archives” by the Georgia Archives, a finalist in the category of Biography for “Georgia Author of the Year” by the Georgia Writers Association and was a finalist in the category of Biography for the ForeWord Indie Awards for Book of the Year.

For more information about the John Macpherson Berrien Award please contact Patricia Meagher, GHS Director of Communications at pmeagher@georgiahistory.com or by phone at 912.651.2125, ext. 153.