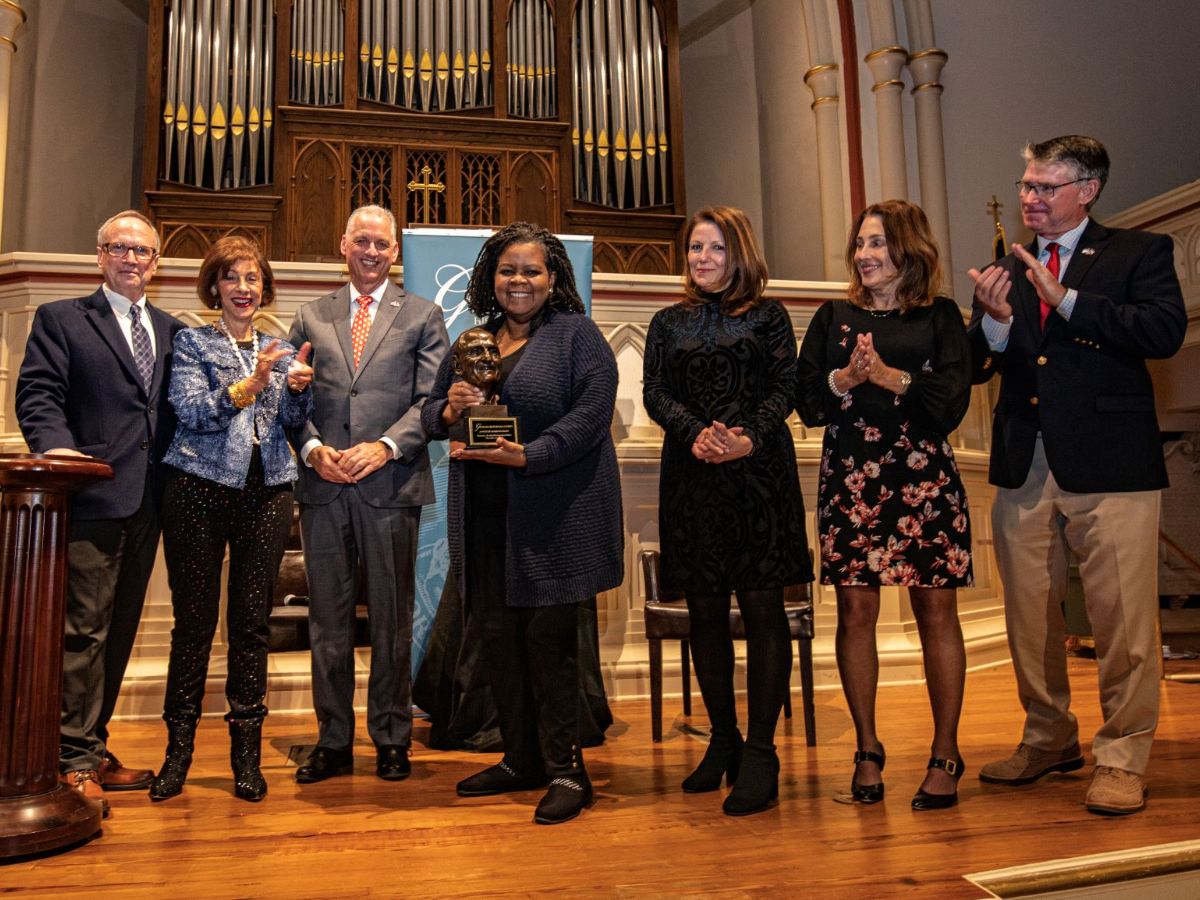 Members of Vince Dooley’s family attended the event to present the honor to Annette Gordon-Reed.

Annette Gordon-Reed is the award-winning historian and author of Thomas Jefferson and Sally Hemings: An American Controversy (1997, University of Virginia Press), The Hemingses of Monticello: An American Family (2008, W.W. Norton & Company), which won the 2009 Pulitzer Prize and 15 additional awards, and On Juneteenth (2021, Liveright), her latest book.

“This year’s recipient, Annette Gordon-Reed of Harvard University, is especially deserving of this recognition,” said W. Todd Groce, Ph.D., President and CEO of the Georgia Historical Society. “Over the past 25 years, Professor Gordon-Reed has participated in multiple educational programs sponsored by the Georgia Historical Society, including public lectures, televised roundtable discussions, and federally funded workshops for college and university faculty. This service along with her highly original and game-changing research on topics ranging from Thomas Jefferson, Sally Hemings, the Hemings family, President Andrew Johnson, and most recently, the newly created national holiday of Juneteenth, has advanced the mission of the Georgia Historical Society and shaped the way Americans understand the past and see themselves in the present.”

Individuals designated as Dooley Distinguished Teaching Fellows are national leaders in the field of history as both writers and educators whose research has enhanced or changed the way the public understands the past. In addition to their outstanding scholarship, Dooley Distinguished Teaching Fellows have served the Georgia Historical Society as faculty in teacher training seminars, as lecturers, as consultants, or in a similar capacity. Being designated as a Dooley Distinguished Fellow recognizes and formalizes the relationship forged through this service. Past recipients include Pulitzer Prize winning historians David Blight and Rick Atkinson.

The Vincent J. Dooley Distinguished Fellows program honors the late Vince Dooley for his lifelong commitment to history and higher education. As a longtime member of the Georgia Historical Society’s Board of Curators, Coach Dooley demonstrated his strong belief in and support of the Society’s mission as a nationally-recognized research and educational institution. The program is designed to accomplish two goals consistent with Coach Dooley’s life and legacy: recognizing senior scholars in the field of history and mentoring and developing emerging historians. The Dooley Distinguished Fellows program permanently associates Coach Dooley’s name with outstanding historical research and scholarship through the ongoing recognition of Teaching and Research Fellows.

Gordon-Reed has won sixteen book prizes, including the Pulitzer Prize in History in 2009 and the National Book Award in 2008, for The Hemingses of Monticello: An American Family (W.W. Norton, 2008).

In addition to articles and reviews, her other books include Thomas Jefferson and Sally Hemings: An American Controversy (UVA Press, 1997); Andrew Johnson, a volume in the “American Presidents Series” (Times Books/Henry Holt, 2010); and, with Peter S. Onuf, “Most Blessed of the Patriarchs”: Thomas Jefferson and the Empire of the Imagination (Liveright, 2016). Her most recent book, On Juneteenth, was published in 2021 (Liveright).

For additional information please contact Keith Strigaro, GHS Director of Communications at 912-651-2125, ext. 153 or by email at kstrigaro@georgiahistory.com.