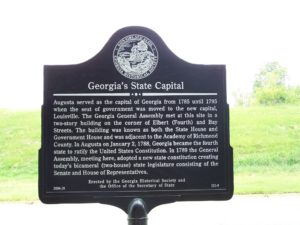 This week’s #MarkerMonday highlights the Georgia Constitutional Convention of 1788. Between May and September 1787, delegates from the thirteen states of the United States met in Philadelphia, Pennsylvania, with the intent to revise the Articles of Confederation. The Articles created a loose confederation of sovereign states and a weak central government, leaving most of the power with state governments. The need for a stronger federal government soon became apparent, given its lack of power to handle and enforce domestic and foreign policy matters. The result of what is now known as the Constitutional Convention was the creation of the United States Constitution, establishing a federal government with more specific powers, including those related to foreign affairs. The new constitution signed by 39 of the 55 delegates attending the convention was sent to the states to be ratified in September 1787. At this time, Augusta served as the capital of Georgia. The Georgia General Assembly, the state’s legislative body, called for a special convention to ratify the Constitution. The special convention consisted of 26 delegates representing Georgia’s 11 counties.  Meeting in late December 1787, the delegates voted unanimously to approve the Constitution two days after the initial meeting. On January 2, 1788, the delegates signed the Georgia Ordinance Ratifying the United States Constitution, making Georgia the fourth state to ratify the Constitution. Georgians had several reasons to support the ratification of a new constitution. Georgia’s lawmakers and farmers hoped that a stronger central government would assist the state in its negotiations with the Creek Nation, which claimed large portions of Georgia as part of its land.  Along the coast, Georgians thought that a strong central government would be beneficial to regulate trade.  The ratification of a new federal constitution also led to a revision of the state’s constitution the following year. 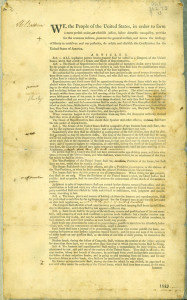 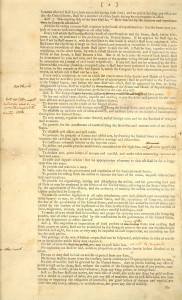 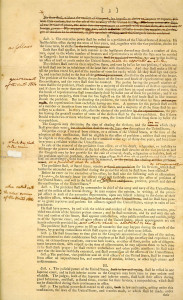 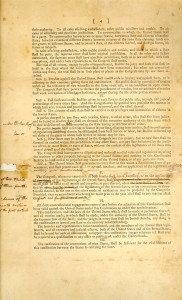 Explore the links below to learn more about the Georgia Constitutional Convention of 1788.

GHS is proud to house Abraham Baldwin’s Draft Copy of the U.S. Constitution in the Georgia Historical Society Image Catalog.

Department of State- Office of the Historian: Constitutional Convention and Ratification, 1787-1789

Department of State- Office of the Historian: Articles of Confederation, 1777-1781

National Archives: Meet the Framers of the Constitution

Yale Law School- The Avalon Project: Ratification of the Constitution by the State of Georgia, January 2, 1788

Rodell, Fred. 55 Men: The Story of the Constitution: Based on the Day-by-Day Notes of James Madison. Harrisburg, PA: Stackpole Books, 1986.