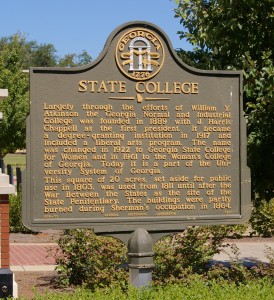 Marker Text:  Largely through the efforts of William Y. Atkinson the Georgia Normal and Industrial College was founded in 1889 with J. Harris Chappell as the first president. It became a degree-granting institution in 1917 and included a liberal arts program. The name was changed in 1922 to Georgia State College for Women and in 1961 to the Woman’s College of Georgia. Today it is part of the University System of Georgia.

This square of 20 acres, set aside for public use in 1803, was used from 1811 until after the War Between the States as the site of the State Penitentiary. The buildings were partly burned during Sherman’s occupation in 1864.

Tips for Finding This Marker: On North Clark Street (Business U.S. 441) 0 miles from West Hancock Street (Georgia Route 49), on the right when traveling north in Milledgeville.