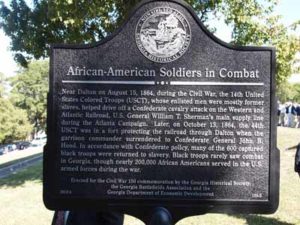 Marker Text: Near Dalton on August 15, 1864, during the Civil War, the 14th United States Colored Troops (USCT), whose enlisted men were mostly former slaves, helped drive off a Confederate cavalry attack on the Western and Atlantic Railroad, U.S. General William T. Sherman’s main supply line during the Atlanta Campaign. Later, on October 13, 1864, the 44th USCT was in a fort protecting the railroad through Dalton when the garrison commander surrendered to Confederate General John B. Hood. In accordance with Confederate policy, many of the 600 captured black troops were returned to slavery. Black troops rarely saw combat in Georgia, though nearly 200,000 African Americans served in the U.S. armed forces during the war.

Erected for the Civil War 150 commemoration by the Georgia Historical Society, the Georgia Battlefields Association and the Georgia Department of Economic Development in 2010.

Tips for Finding This Marker: At 104 Fort Hill Terrace in Dalton