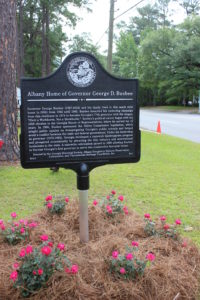 Marker Text:  Governor George Busbee (1927-2004) and his family lived in this ranch style home (c.1956) from 1962 until 1983. Busbee launched his underdog campaign from this residence in 1974 to become Georgia’s 77th governor with the slogan, “Elect a Workhorse, Not a Showhorse.”  Busbee’s political career began with his 1956 election to the Georgia House of Representatives, where he served for 18 years. In 1960, Busbee sponsored the Sibley Commission legislation, which sought public opinion on desegregating Georgia’s public schools and helped avoid a conflict between the state and federal government. Under his leadership as governor (1975-1983), Georgia developed a statewide kindergarten program and prospered economically by attracting the film industry and international businesses to the state. A statewide referendum passed in 1980 allowing Busbee to become Georgia’s first governor to serve two consecutive four-year terms.

Tips for Finding This Marker: Located at 1205 W 3rd Avenue in Albany