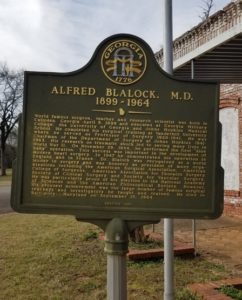 Marker Text: World famous surgeon, teacher and research scientist was born in Culloden, Georgia April 5, 1899 and educated at Georgia Military College, the University of Georgia and Johns Hopkins Medical School. He completed his surgical training at Vanderbilt University where he served as Professor of Surgery 1928-1941. He was Chairman of the Department of Surgery at Johns Hopkins 1941-1963. His research on traumatic shock led to saving many lives in World War II. On November 29, 1944, he performed the first ‘blue baby’ operation. This success was important in the development of modern heart surgery. In 1947 he demonstrated his operation in England and in France. Dr. Blalock was recognized as a world leader in surgery and was honored as president of many organizations including the American Surgical Association, American College of Surgeons, American Association for Thoracic Surgery, Society of Clinical Surgery and Society for Vascular Surgery. He was particularly proud of his election to the National Academy of Sciences and the American Philosophical Society. However, his proudest achievement was the large number of famous surgical teachers and investigators he taught and trained. He died in Baltimore, Maryland on September 15, 1964.

Tips for Finding This Marker: Located at the intersection of Main Street/College Street and Old Post Road in Culloden.