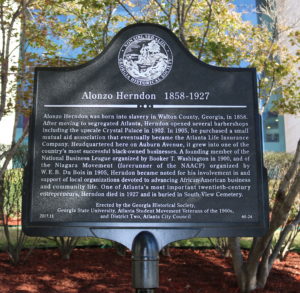 Marker Text: Alonzo Herndon was born into slavery in Walton County, Georgia, in 1858. After moving to segregated Atlanta, Herndon opened several barbershops including the upscale Crystal Palace in 1902. In 1905, he purchased a small mutual aid association that eventually became the Atlanta Life Insurance Company. Headquartered here on Auburn Avenue, it grew into one of the country’s most successful black-owned businesses. A founding member of the National Business League organized by Booker T. Washington in 1900, and of the Niagara Movement (forerunner of the NAACP) organized by W. E. B. Du Bois in 1905, Herndon became noted for his involvement in and support of local organizations devoted to advancing African-American business and community life. One of Atlanta’s most important twentieth-century entrepreneurs, Herndon died in 1927 and is buried in South-View Cemetery.