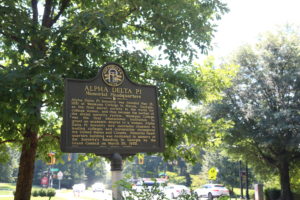 Marker Text:  Alpha Delta Pi Sorority was founded May 15, 1851 at Wesleyan College in Macon, Georgia, as the first secret society in the world for college women, and thus became the mother of the social sorority system. Wesleyan Collage was the first educational institution to grant an academic degree to a woman. Alpha Delta Pi Sorority now maintains chapters in leading colleges and universities throughout the United States and Canada. Memorial Headquarters building was dedicated in memory of the Sorority’s founding in Georgia by the Grand Council on March 26, 1955.

Tips for Finding This Marker: On Ponce de Leon Avenue (U.S. 78) near Oakdale Road NE, on the right when traveling west in Atlanta.