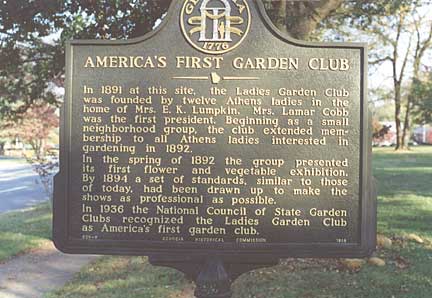 Marker Text: In 1891 at this site, the Ladies Garden Club was founded by twelve Athens ladies in the home of Mrs. E.K. Lumpkin. Mrs. Lamar Cobb was the first president. Beginning as a small neighborhood group, the club extended membership to all Athens ladies interested in gardening in 1892.

In the spring of 1892 the group presented its first flower and vegetable exhibition. By 1894 a set of standards, similar to those of today, had been drawn up to make the shows as professional as possible.

Tips for Finding This Site: At 973 Prince Avenue in Athens.