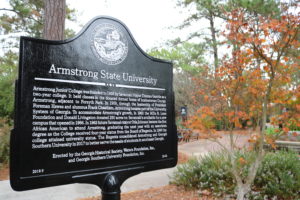 Marker Text: Armstrong Junior College was founded in 1935 by Savannah Mayor Thomas Gamble as a two-year college. It held classes in the donated former home of businessman George Armstrong, adjacent to Forsyth Park. In 1959, through the leadership of President Foreman Hawes and alumnus Frank Cheatham, Armstrong became part of the University System of Georgia. To accommodate Armstrong’s growth, in 1962 the Mills B. Lane Foundation and Donald Livingston donated 250 acres on Savannah’s southside for a new campus that opened in 1966. In 1963 future Savannah mayor Otis Johnson became the first African American to attend Armstrong, graduating the next year with an associates degree as the College received four-year status from the Board of Regents. In 1996 the college attained university status. The Regents consolidated Armstrong and Georgia Southern University in 2017 to better serve the needs of students in southeast Georgia.

Tips for Finding This Marker: Located next to the Historic Quad Fountain behind Burnett Hall