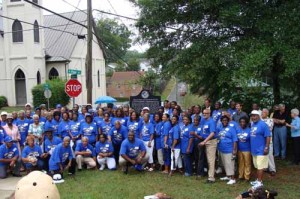 Marker Text: Established in 1916-1917 and accredited in 1922, Athens High and Industrial School (AHIS) was Georgia’s first four-year public high school for African-American students. Originally known as Reese Street School, founded in 1914, AHIS offered a full curriculum of classes including Latin, Greek, literature, history, chemistry, and physics. Industrial classes were offered in the evenings for adults. Leading black educator Samuel F. Harris served as principal of AHIS until his death in 1935. In 1933, AHIS moved to this location, previously the site of the Knox Institute which was founded by the Freedmen’s Bureau in 1868.

Tips for Finding This Marker: At the intersection of Pope and Reese Streets in Athens