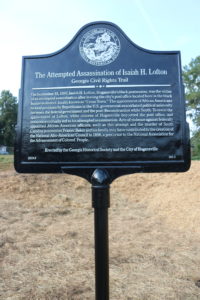 Marker Text: On September 15, 1897, Isaiah H. Lofton, Hogansville’s black postmaster, was the victim of an attempted assassination after leaving the city’s post office located here in the black business district, locally known as “Cross Town.” The appointment of African Americans to local positions by Republicans in the U.S. government exacerbated political animosity between the federal government and the post-Reconstruction white South. To resist the appointment of Lofton, white citizens of Hogansville boycotted the post office, and tensions eventually led to his attempted assassination. Acts of violence against federally appointed African-American officials, such as this attempt and the murder of South Carolina postmaster Frazier Baker and his family, may have contributed to the creation of the National Afro-American Council in 1898, a precursor to the National Association for the Advancement of Colored People.

Erected by the Georgia Historical Society and the City of Hogansville

Tips for Finding This Marker: At the intersection of West Main Street and Boozer Street .