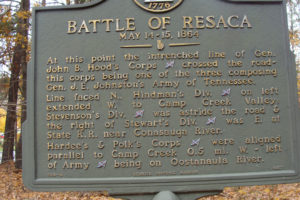 Marker Text: At this point the intrenched line of Gen. John B. Hood’s Corp’s [CS] crossed the road — this corps being one of the three composing Gen. J.E. Johnston’s Army of Tennessee.

Tips for Finding This Marker: At the intersection of Chitwood Road and US 41 in Resaca