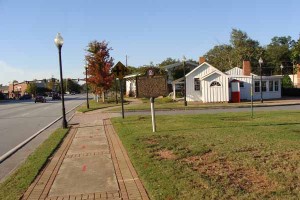 July 4. The 4th A. C. [US], (E. of R. R.), attacked the Confederate right to ascertain strength of the position; it was found impregnable. A similar attack on the left near Ruff’s Mill was alike ineffective. Being outflanked, Johnston withdrew to his River Line that night.

Tips for Finding This Marker: At Smyrna Museum, on Atlanta Road in Smyrna.