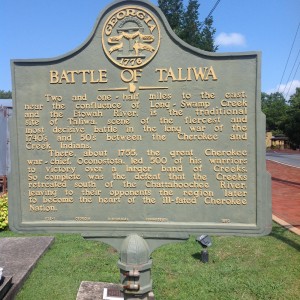 Marker Text: Two and one-half miles to the east, near the confluence of Long-Swamp Creek and the Etowah River, is the traditional site of Taliwa, scene of the fiercest and most decisive battle in the long war of the 1740’s and 50’s between the Cherokee and Creek Indians.

There, about 1755, the great Cherokee war-chief, Oconostota, led 500 of his warriors to victory over a larger band of Creeks. So complete was the defeat that the Creeks retreated south of the Chattahoochee River, leaving to their opponents the region later to become the heart of the ill-fated Cherokee Nation.

Tips for Finding This Site: Intersection of Gilmer Ferry Road and Valley Street in Ball Ground.