Bethesda: Highlights of its History

Bethesda: Highlights of its History 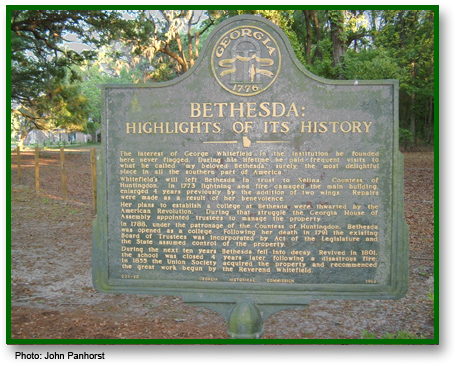 Marker Text: The interest of George Whitefield in the institution he founded here never flagged. During his lifetime he paid frequent visits to what he called “my beloved Bethesda, surely the most delightful place in all the southern part of America.”

Whitefield’s will left Bethesda in trust to Selina, Countess of Huntingdon. In 1773 lighting and fire damaged the main building, enlarged 4 years previously by the addition of two wings. Repairs were made as a result of her benevolence.

Her plans to establish a college at Bethesda were thwarted by the American Revolution. During that struggle the Georgia House of Assembly appointed trustees to manage the property.

In 1788, under the patronage of the Countess of Huntingdon, Bethesda opened as a college. Following her death in 1791 the existing Board of Trustees was incorporated by Act of the Legislature and the State assumed control of the property.

During the next ten years Bethesda fell into decay. Revived in 1801, the school was closed 4 years later following a disastrous fire. In 1855 the Union Society acquired the property and recommenced the great work begun by the Reverend Whitefield.

Tips for Finding This Marker: On Old Montgomery Road in Savannah.