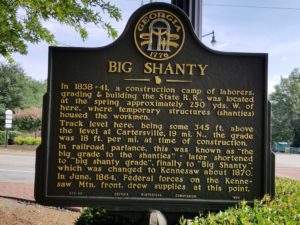 Marker Text: In 1838-41, a construction camp of laborers grading & building the State R. R., was located at the spring approximately 250 yds. W. of here, where temporary structures (shanties) housed the workmen.

Track level here was some 345 ft. above the level at Cartersville, 19 mi. N.; the grade was 18 ft. per mi. at time of construction. In railroad parlance, this was known as “the big grade to the shanties” — later shortened to “big shanty grade” and finally to “Big Shanty”, which was changed to Kennesaw in about 1870.

In June 1864, Federal forces on the Kennesaw Mtn. front drew supplies at this point.

Tips for Finding This Marker: At the intersection of Cherokee and Main Streets in Kennesaw.