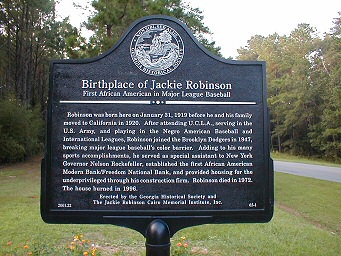 Marker Text: Robinson was born here on January 31, 1919, before he and his family moved to California in 1920. After attending U.C.L.A., serving in the U.S. Army, and playing in the Negro American Baseball and International Leagues, Robinson played for the Brooklyn Dodgers in 1947, breaking Major League Baseball’s color barrier. Adding to his many athletic accomplishments, he served as special assistant to New York Governor Nelson Rockefeller, established the first African American Modern Bank/Freedom National Bank, and provided housing for the underprivileged through his construction firm. Robinson died in 1972. The house burned in 1996.

Tips for Finding This Marker: On Hadley Ferry Road, north of Meridian Road in Cairo. Click here for a duplicate historical marker located in downtown Cairo.