Bobby Jones and the Beginning of the Grand Slam

Bobby Jones and the Beginning of the Grand Slam 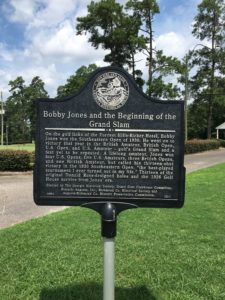 Marker Text: On the golf links of the Forrest Hills-Ricker Hotel, Bobby Jones won the Southeastern Open of 1930. He went on to victory that year in the British Amateur, British Open, U.S. Open, and U.S. Amateur – golf’s Grand Slam and a feat yet to be repeated. A lifelong amateur, Jones won four U.S. Opens, five U.S. Amateurs, three British Opens, and one British Amateur, but called his thirteen-shot victory in the 1930 Southeastern Open, “the best-played tournament I ever turned out in my life.” Thirteen of the original Donald Ross-designed holes and the 1926 Golf House survive from Jones’ era.

Tips for Finding This Marker: At the Forest Hill Golf Club clubhouse along Pine Needle Rd in Augusta