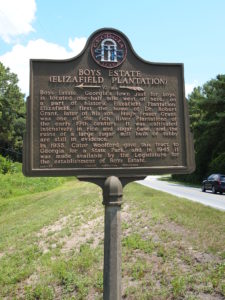 Marker Text: Boys Estate, Georgia’s town just for boys, is located one-half mile west of here, on a part of historic Elizafield Plantation. Elizafield, first the home of Dr. Robert Grant, later of his son, Hugh Fraser Grant, was one of the rich River Plantations of the early 19th century. It was cultivated intensively in rice and sugar cane, and the ruins of a large sugar mill built of tabby are still in evidence.

In 1935, Cator Woolford gave this tract to Georgia for a State Park, and in 1945 it was made available by the Legislature for the establishment of Boys Estate.

Tips for Finding This Site: On Ocean Highway (US Hwy 17) north of GA Hwy 99 in Broadfield.